From 118Wiki
(Redirected from Hunt, Guy)
Jump to navigation Jump to search 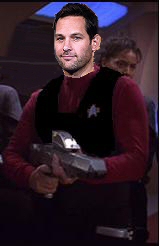 Guy Perry Hunt was born on the Greece Island of Crete. His mother was stationed there at the Star Fleet Medical Operations Center for Advanced Surgery. In Guy's young life he lived on 3 star ships, 2 moons and an Astrid station. In Guys adult life he has lived on 1 star ship and 2 planets. Guy is an avid collector of artifacts to include his passion, ancient hand held weapons. His grandparent lives on Earth's Moon where they have the largest Coffee Farm in the solar system. Guy never travels without a case of his grandparent’s coffee beans, grinder and a French press.

Guy’s Mother urged him to enter Medical School. Guy became a Medical student at John Hopkins. In his 3rd year Guy got a job offer from the Federation Diplomatic Core. Leaving John Hopkins… Guy never really fit in there, so it was easy to leave, telling his mother the great Federation Surgeon was hard however.

At the Age of 28 Guy became the aid to the Earth Ambassador General. After two years of back breaking service and long hard hours he became the Chief of Staff for the Star Ship Operations, a 50 year old Excelsior Class-Refit, the USS Providence.

Guy Served on the Providence for 3 years aiding the Ambassador in all Diplomatic Duty's and 3 months on Romulus as a Plenipotentiary. While on the Providence Hunt went on 67 Federation Mission and worked on many agreements after 1st Contacts had been made. After Ambassador Hasten was killed, when his shuttle was the target of an attack.

Guy entered Star Fleet Academy to get away from his own feeling after his friends death, hating the Romulans. Guy was also selected for Flight School in his 3rd year at the Academy. In Guy’s 4th year he went to the Advanced Flight Academy Mars. While at the Academy Hunt meet his 1st love David Harrigan, a Pilot and flight School Instructor. David was the main driving force to why Hunt went to Flight school. Guy did not want to hold a station at the helm. David and Guy became very close while Guy was at the Academy. Guy wanted a deep-space duty posting and David wanted him to stay on Earth or Mars, this conflict resulted in the two’s break up. Hunt was Selected for Duty aboard the USS Resolution by Commander Toni Turner.

While on the Resolution Guy posed as a Laudean terrorist on the Laudean homeworld… Guy fell off a snow bank while on the planet. Commander Nicholotti, climbed down the banks to reach Guy some 80 feet below the cave in. Doctor Eliaan Deron, was able to help set the bones in the cave they were staying in. After that Mission Guy was promoted to Lt. JG and made Chief of Operations…

During the next Mission with the Borg, Guy was transferred to the USS Independence as her Chief of Operations. While on the Indy, Guy was well known to butt heads with her Acting Captain, Commander Cody. Guy was demoted back to Ensign and relieved of his post. After an investigation Guy was cleared of all charges and transferred to the USS Ronin. Captain Walker made Guy the Tactical Officer… Guy hated the duty post and he had lost his love for Star Fleet after dealing with Commander Cody. Guy turned in his resonation to Captain Walker, and returned to Earth…

Guy took a teaching job at M.I.T. as the Professor of Advanced Technology… He was very impressed with what he saw in his students… Guy picked out a hand full of them and took them to Star Fleet Engineering to help develop new Technology’s for the fleet. After a few years of teaching Guy was asked to head the department as the Vice Dean… Guy spent a few years in the role when Commander Andrus Jaxx walked into his office.

Guy was told about the missing USS Eagle, and Jaxx recalled Guy to the Fleet as Lt. JG and was placed as the Chief of Operations USS Eagle, on the USS Victory… Guy helped locate the Eagle where it had crash landed in an ocean… After recovering a few officer and sending the Eagle some supplies for the recovery operations.

Guy was transferred as Chief of Operations to the USS Victory and made a full Lt. Guy worked a mission where a Mining station had become ripped in time… He found over 5 different versions of his self on that station…

Guy was Transferred to Strategic Operations Officer and served the Victory in that role also taking up other departments from time… Guy also lead an away mission to Earth in 1969 and helped rebuild the Apollo 11 rocket.

Guy is a lover of classical music; his mother had him in music school at the age three. Guy attended the Julliard School of Music. He first learned the Piano and then ventured off to the Piccolo, Flute, Basset Clarinet and his favorite the Violin. Guy later took up the Pipe Organ, and played at his Parents Anglican Church for a year, until leaving for the Diplomatic Core. When transferred to the USS Independence, Guy was very happy to find that there were two Pipe organs on board, one in the Chapel and the other in the Theater. After long stressful days on duty you could find Guy in ether. Guy also held the USS Independence Symphony practice every Thursday night. Guy plays the Violin mostly in the Symphony Concerts, but will also play the pipe organ from time to time. Guy was the music Director for the Phantom of the Opera play that was held on the Independence, also playing the Organ for the play.

In cases where priorities are ambiguous or where specific Ops approval is required, the panels will display a menu of the most probable options for action. In virtually all cases, the Operations Manager also has the ability to input choices beyond those presented by the action menus. This is important because it is impossible for mission planners to anticipate every possible situation. Action menus may be displayed for any current activity even those which would normally be handled automatically upon keyboard request from Ops.

An example is a scenario where an Away Team is to be sent on a mission to a planetary surface. Typical Ops responsibilities might include

Coordination with Mission Ops for assignment of comm relay frequencies and preparations to monitor Away Team tricorder telemetry.

Notification for issuance of tricorders, phasers, environmental gear, and other mission specific equipment.

Notification of Engineering to prepare for power allocation for transporter operations, as well as deflector shield shutdown, if necessary.