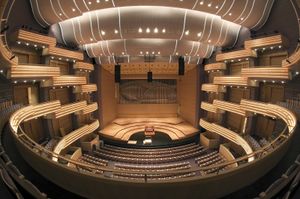 The Chamber is the premiere classical music hall aboard Starbase 118, and considered within the top three in the sector.

Is was originally located in the New York District, and moved to the island of Trinity City after the commercial district reconstruction in 2394. This high-class venue operates a formal dress code and the drinks are far from cheap, although the furnishing and smartly attired staff and exemplary service go some way to softening the blow. The Chamber is home to the Starbase 118 Orchestra, and also provides “open” nights where pre-booked ensembles of classical musicians – of a suitably high standard of course! - might perform.

The music is primarily of Terran origin, although there are also “culture” evenings twice weekly where classical music from other planets and races are performed with equal fervour by the musicians fortunate enough to play the hall. These nights are considered amongst the highlights of the weeks performances, second only to the 118 Orchestra.

To be considered for a slot during an open night is considered a worthy honour, to be chosen to play there however, is the chance of a lifetime.