The science department based on Starbase 118 is attached to the local Academy branch, and helps to support the work of the entire sector. The station gives them access to large amounts of samples, a professional and large testing environment, and overall forms a good basis for researchers and Starfleet support staff.

The Starbase's science groups overlap heavily with the Federation's civilian science offices, to the point that most see them as one large group; however, the civilian offices are represented and lead by their own staff, with Starfleet only directly controlling its own groups. 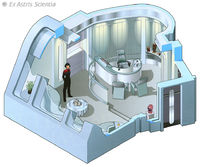 SCISEC handles Starfleet's high security operations and studies, including R&D, weapons research, and other projects that need to be kept from civilian and enemy eyes. Almost all of SCISEC's work is classified, though some projects far more than others. SCISEC regularly works with the Intelligence, Marine, and Tactical branches of Starfleet.

Often referred to simply as the 'go teams', IPA (Immediate Project Assistance) is a Starfleet initiative meant to assist both Federation and civilian interests. The teams gather scientists from all matters of expertise into short-notice teams that can be deployed quickly to help with projects, incidents and crisis situations. Sometimes referred to in the press as the 'instant expert' teams, they've provided life saving insight to Starfleet and civilian alike.

The Inclusive Development of Equipment Agency is a team that specializes in adapting Starfleet equipment and tech for use by species with special biological concerns and non-humanoid forms, such as the Gorn, Tholians, and Edosians.

The Starbase also houses many civilian science agencies, including :