The Ithassa Triangle, also known as The Triangle, is an area of space at the edge of the Ithassa Region infamous for its strange effects and occurrences. In the Triangle, instrumentation has been known to go haywire, ships have disappeared, and strange happenings go explained.

In 2389, the USS Tiger-A left Deep Space 17 on her maiden voyage, assigned to deep space exploration in the uncharted areas of the Ithassa Region, near and beyond Tholian space. Before heading out on this long term mission, Deep Space 17 picked up a faint distress signal which appeared to be coming from a Tholian ship or station in the Triangle. Upon arrival in the Triangle, the Tiger was hit by metron radiation, and its effects began to manifest with some of the crew as well as with shipboard equipment. The Tiger also encountered the Free Trade Union ship Morgan's Bounty, which was adrift after having run into an unknown object in the Triangle. 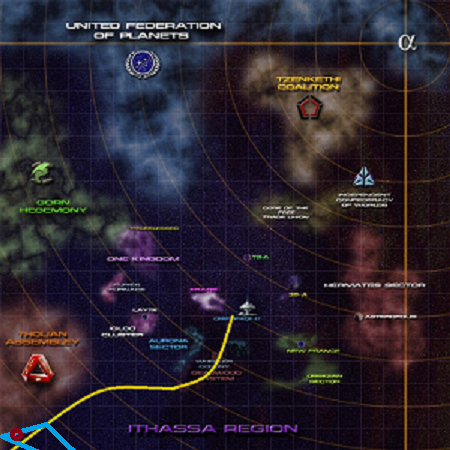