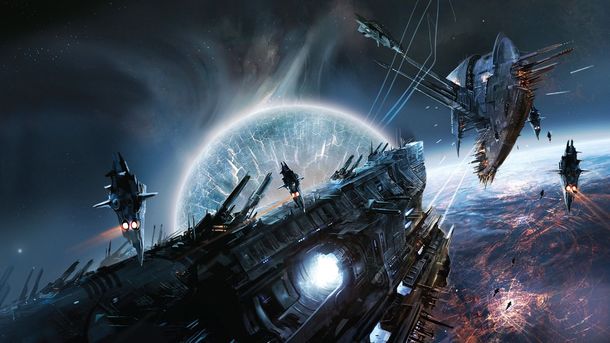 The Start of the Dark Shadow Wars over 200 years ago

The Allied Commonwealth of Worlds (just Commonwealth for short) is a group made up of member species who came together centuries ago in peace, cooperation, and exploration. Just under a century ago, the Commonwealth faced a powerful enemy that began a war by destroying the majority of the member species home worlds. Those that survived came together and pooled the little resources they had left to build large space stations that would house their survivors into colonies. The Commonwealth has recently discovered, what seems to be, a gateway to another galaxy. Their existence has been bleak, hard, and joyless. They have grown more and more desperate over time. They have been forced to piracy, terrorism, and murder. The once peaceful and honorable people have slowly de-evolved into the very type of warmongers and conquerors they once fought against. But with the promise of finding their way to a new place that might bring an end to their struggles, there is hope for the Commonwealth and it’s people.

History of the Allied Commonwealth of Worlds:

The Allied Commonwealth of Worlds came into existence nearly 400 years ago when its founding members signed an agreement bring their worlds together under one banner. For the next 80 years the Commonwealth prospered. New worlds petition for membership and the Commonwealth grew more prosperous as they peacefully explored their galaxy. The Commonwealth eventually encountered a strange, mysterious species that only ever seemed to appear as ghost-like figures. The Commonwealth tried to engage them in diplomacy, but their envoy ship was destroyed and they never heard from or saw them until 5 years later.

The diminished and battered Commonwealth found themselves in a galaxy free from the Dark Shadows. Unfortunately, the galaxy was a sparse place with limited resources and many aggressive and hostile species fighting for the little resources available. Over the next 200 years the Commonwealth struggled to maintain it’s stations and ships. They have used force, piracy and deception to acquire the resources needed to keep themselves alive. However, the Commonwealth leadership knows that there is not enough available resources in the galaxy to continue to survive and it is becoming a harder struggle to defend attacking species.

Recently, the Commonwealth leadership has picked up what looks like could be the beginnings of a gateway to another galaxy on long range sensors. They sent a small recon fleet of scout ships to study the anomaly. As is the case in their galaxy, they came under attack, but were successful in taking the needed reading of the anomaly. The Commonwealth has discovered that the anomaly seems to be connected to an old neutron star in new galaxy.