First reports by unmanned probes, indicated that T8A was an uninhabited tropical paradise. On 238404.29 two USS Triumphant Security Officers, Kassa Quay & Thompson Kirby,set out to explore the planet as a project for the USS Triumphant.

NOTE: As you can see from the Topical Map below, we named key features on the planet to honor the present crew of the USS Triumphant.

A 19th century French novelist named Gustave Flaubert, wrote, "I love above all the sight of vegetation resting upon old ruins; this embrace of nature, coming swiftly to bury the work of man the moment his hand is no longer there to defend it, fills me with deep and ample joy."

This was the feeling I had when I first saw the ruins. The metal spheres and the figure of a woman indented into the ground, were all that remained of an ancient civilization, that had evidently perished attempting to make changes to the perfection of Planeta del Amor. Luckily, the planet's beauty has remained unblimished, except for the ruins, and a few other spheres scattered about the land masses.

In conclusion, I would say that T8A is a planet to be cherished, visited infrequently, and preserved in its natural state. Any experimentations should be done off-planet as it is truely a paradise.

Exploration by the USS Ronin 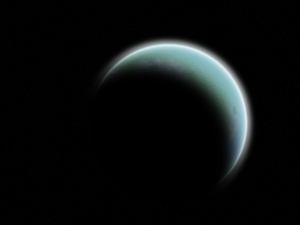 On stardate 238710.10 the USS Ronin, under the command of Commander Toni Turner returned to T8A to investigate the disappearance of a Marine and a civilian.