Bryce Tagren-Quinn is currently serving as a medical officer aboard the USS Gorkon.

No one could anticipate how he would mature, given his unique lineage. When Bryce was a child, he grew, accomplished developmental milestones, and ultimately went through puberty at the same rate as any full-blooded human. At about 19, the aging process started to slow due to his El-Aurian side and he essentially 'stopped' physically aging by his early 20s.

Overall, the aging process is different for El-Aurian hybrids and seems to be unique to each individual based on stress, life experience, and other factors. There have been theories and studies mentioning the Hayflick limit and El-Aurian immune systems, but this remains a topic of debate. It is also said that an El-Aurian can age when they "choose to."

El-Aurian genes seem to be dominant in some hybrid cases (depending on the species), and that seems to ring true with Bryce since his systems (for example, his circulatory/cardiovascular, nervous, endocrine, and immune/lymphatic systems) are seemingly more El-Aurian than human. However, there are subtle human variations and influences. He has experienced Af-Kelt, and has a dense hippocampus with vivid memory recall (which contributed to his secondary trauma - see Medical Notes), and a stiff knee which might be more heightened due to the physical sensitivity of El-Aurians (see Medical Notes). The symptoms experienced during Af-Kelt can likely be attributed to these physical sensitivities, too.

El-Aurians are also considered endangered and known to be semi-ancient and nomadic. They think of themselves as "listeners" (meaning that they can "hear" the world around them, likening it to "music"), have limited empathy and telepathy, and an innate temporal sense (although the latter of that statement may be confined primarily to those that experienced the Nexus event). However, with the present state of El-Aurian numbers and their ability to seemingly intermarry and interbreed with other species, more and more information is being gathered that would shed light on their unique biology/physiology. 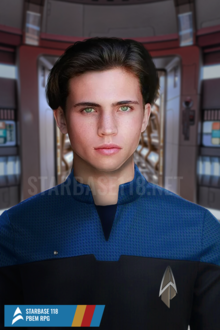 Bryce in 2399, prior to the chroniton exposure.

Biological father and former Starfleet Captain (Human) of the USS Poseidon and, later, the SS Valestar. He is charming and brilliant, with graying dark brown hair and dull slate-blue eyes. Father and son have a complicated history, and their relationship is tenuous at best. While he is officially "retired" from Starfleet, it is widely acknowledged that he was discharged from service. He has been known to be a bit shady, making unethical judgment calls and deflecting blame onto others. Has sociopathic tendencies. Despite all this, the man is shrouded a bit in mystery. However, part of it is likely because of the position he once held and Starfleet's desire and ability to manage the situation from a public-facing view properly.

Initially, Amy sought assistance to conceive but could not foresee a "clinical error" that would reveal itself during her third trimester. She was a full-blooded Terran that carried her twins to term. In Bryce's early life, Amy was his anchor. His beautiful, sweet, and caring mother. When he grew a little older and found that she wasn't his biological mother, it was met with disbelief and anger. Later, when it was revealed that his father possibly manipulated things (though never wholly proven), it further solidified Bryce's views of him; complete disdain.

His biological mother, who donated her eggs for altruistic reasons decades ago before entering medical school. The intent was to provide an option for Human and El-Aurian couples specifically, those who were having challenges conceiving. However, she could not foresee a "clinical error" that would produce Bryce and Elyia. She currently has her own medical practice but previously served as a Lieutenant Commander and First Officer on the USS Vigilant-A.

Gregarious, vibrant, and witty, Elyia is Bryce's compass and lifeline. She's an accomplished psychiatrist and social psychologist. She was once married and has a young child, a six-year-old son named Rory (who currently lives in Kentucky, USA). While Bryce broods, Elyia brings it out in the open and gets over it. She helped to pull him out of the dark abyss that was their teenage years, the Calesian Lunar Colony disaster, and post-Rogue World (and probably others, but we haven't gone there quite yet).

Bryce was born to Paul Quinn and his wife Amy, an elementary school teacher, in San Francisco, California. His mother wanted a stable upbringing for him and his twin sister, Elie, so they stayed Earthbound while his father traveled the stars on his Sovereign-class vessel, the USS Poseidon. The family was reunited during times of shore leave, interstellar calls, and an occasional visit to the ship, but the distance (and other things) strained his parent’s marriage. Eventually, they divorced (the twins were three at the time). His father’s presence at that point was perceived as obligatory at best, and when he later "retired" from Starfleet, his presence in his children’s lives remained minimal. Duty before family, even when he was no longer active. It’s a bit of a sore topic for Bryce, one that he would not bring up in casual conversation.

His views of his father were made even cloudier when he learned that his biological mother was Aribelle Tagren, an El-Aurian/Human hybrid physician and decorated Starfleet officer. There’s an even deeper history there that left Bryce confused and conflicted. On some level, he felt betrayed by a supposed excellent officer, a man, a father who continually let him down.

However, Bryce’s personality type didn't allow him to contemplate on matters for too long (or, was it he needed to find purpose to occupy space in his head?). Regardless, he wanted to push forward and find ways to bring some good into the universe and not focus on the bad.

That is the drive that compelled him to pursue medicine. It was always something that clicked for him, and biology seemed to come naturally. He completed his undergraduate studies before attending medical school and then completed his internship and residency.

It was during his career as a doctor that an event forever changed Bryce’s course. A bit jaded with Starfleet (because of his father and seeing how it all ripped through families), the young El-Aurian was committed and content with his civilian medical studies. However, when a Lunar colony on the outskirts of the quadrant suffered a great calamity that resulted in thousands of injuries and casualties in the hundreds, Starfleet called upon civilian medical volunteers to assist. It was called the Calesian Lunar Colony disaster. Bryce was one of these volunteers, and it was during this time something resonated within him, profoundly affecting him.

He had seen so much death and despair and developed a connection with the individuals he was helping. When the civilian efforts were no longer needed after things had reached a less heightened phase, Bryce was shooed away by Starfleet. It left him feeling like he lost a little of himself and suffered from secondary trauma and depression after the events.

Bryce floated between people after that, against the professional medical advice he was given. He took time off practicing medicine to focus on himself, to heal, immersing in nature and finding himself sliding still.

Until he found his footing.

Until he decided to make a change.

Knowing that this was irrevocably a part of his experience and history, he wanted to spin it into something where he could do something.

The decision to join Starfleet came about a year after his experiences. It seemed to manifest out of nowhere, but when the thought occurred to him, Bryce was angry at himself for taking so long to get there. It effectively dispelled those images that plagued him: the idea of helping more, giving his everything to give the best possible chance for better outcomes for others. He would be in a better position never to be sent away again.

There were so many individuals that needed help out there, and he was determined to help where he could. And Starfleet, for whatever complicated his views were, embraced him. And, he embraced them back.