The Tyrellian system is a binary star system in the Tyrellian Sector, located in the Beta Quadrant. It is home to the Tyrellian species and a member of the United Federation of Planets. Located close to the Federation-Klingon border, and the Romulan Neutral Zone, it has become a diplomatic and trade hub between the three political powers.

Palan in transit across Denak A and B.

Denak A and B form a detached binary (i.e. there is no mass transfer between them) in close orbit around a common barycenter.

Diagram of the Tyrellian system, with habitable moons shown. (Not to scale)

The Tyrellian system has 4 inhabited worlds and 2 species native to the system. The inner part of the system and its habitable worlds are protected by a defence grid with advanced sensors, capable of detecting the approach of cloaked vessels. 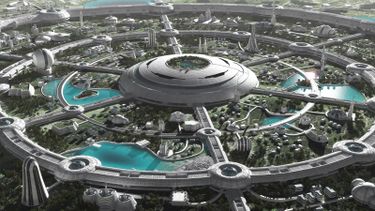 Yarista, the capital city of Palanon.

The vast majority of the Tyrellian population do not live on their homeworld, but rather the largest of the habitable moons in the system, having migrated there after their homeworld was rendered uninhabitable by a natural disaster.

The world is an exemplification of the attitude "aim for peace, but prepare for war" that pervades modern Tyrellian culture. The whole system is well-protected by an array of early warning systems, as well as a standing fleet of Starfleet vessels. Palanon itself boasts an array of planetary defence systems that are among the most potent in the Federation. Despite this, the desire to live peacefully with their neighbours is in clear evidence. The capital city, Yarista, hosts numerous embassies, including major diplomatic missions from the Romulan Star Empire, the Klingon Empire, and the Ferengi Alliance, amongst others. Visitors are welcomed, and the population is diverse.

Soon they were both walking, still linked arms, down a narrow street, shaded with trees and delicate bushes of many colours. Beautiful garlands of white and purple flowers streamed like tears from the branches of some trees, so laden with blossoms that they seemed to have no leaves. Others formed a canopy that hid the sky, letting in only small patches of the waning light reach the ground, and cast multicoloured reflections, patches of gold, orange, purple, green and blue, that formed a whimsical mosaic of light and shadow under their feet.
On either side of the streets were a myriad of small shops selling spices and concoctions of every colour imaginable, sweetening the air with a plethora of exotic and alien aromas for the young Bajoran girl. A Klingon boasted the freshness of her wares over there, the contents of her stall wriggling and writhing, obviously alive. A Tyrellian man, his dark skin glowing with iridescent yellow and teal patches, updated the menu of a small café just a little further along, the names of the viands and brews utterly foreign and strange to her. Up ahead, a tall Vulcan, stern and stiff as only his kind could be, fiddled a bizarre-looking stringed instrument, which gave a subtle and complex soundtrack to the alleyway.

Other major cities on Palanon include Cotral. 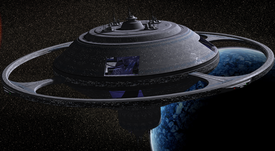 Iana Station, in orbit around Palanon.

Iana Station is a Tyrellian space station that primarily serves as a trade hub and orbital repair facility for the starships that visit the system. Many of the permanent population are engineers or civil servants, and are a mix of Tyrellian and Starfleet personnel. The station is particularly known for its entertainment decks, and one in particular is devoted to a permanent nightlife, hosting pubs, clubs and restaurants to entertain the crews of docked ships, as well as many visitors from Tyrellia itself.

The rapid transport tram, shortened RapTram, provides quick transport to the different sections and districts of the Station. [3] 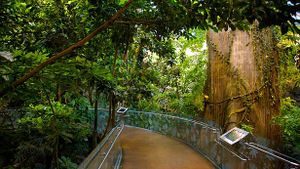 The interior of one of Ereina's forest biodomes.

Ereina is an "ark world", colonised by the Tyrellians with a view to preserving as much life from their home planet as possible. Much of the moon's surface and seas are enclosed within biodomes simulating the conditions of Tyrellia's original biomes. Access is restricted to scientific and educational visits only -- with the occasional tour for diplomats -- and the planet's inhabitants primarily consist of scientists, facility staff, and their families.

Senya: The Cradle of Another Civilisation

The third of Palan's habitable moons, Senya, is home to another sentient species, currently in the E- technological age. Their development is rapid, and estimations are that they will be launching their first space missions within the next few years. Various groups within the Tyrellian people and the Federation at large are in heated debate over when to make contact -- though the species is far from reaching the Federation's usual requirements for first contact, their close proximity means will encounter the Tyrellians long before they have developed warp drive. 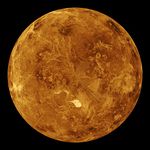 The homeworld of the Tyrellians is unique within the Federation, known for being only one of three inhabited planets to lack a magnetic pole, and one of only seven without any kind of atmosphere. [4] This unusual situation is due to the as yet unexplained loss of the planet's geomagnetic field, which ultimately resulted in total atmospheric ablation by the solar winds of the binary stars.

While their homeworld grew more hostile to life, the Tyrellians created deep underground shelters, preparing to migrate their population to the first of Palan's habitable moons, Palanon, while the flora and fauna were to be moved to another habitable moon, Ereina. It is in these shelters that the current population live, protected from the intense solar radiation that bombards the planet's surface. A substantial part of this small population is an array of scientists dedicated to finding an answer to why the planet lost its geomagnetic field, and how it could be reestablished. Also present in large numbers are archeologists and engineers, dedicated to preserving the structures -- both underground and overground -- for the day when the Tyrellians can return home.

The ninth planet of the Tyrellian system is a Class K body, primarily yellow in colour. Surface features include a petrified stone "forest", valleys and mountains.

It has not been colonised by the Tyrellians and is mostly uninhabited except for a concealed listening station, part of the Tyrellian defence grid, [5] and a renowned spa built over a natural geyser, which attracts bathers and tourists all year round [6].

It is also host to an annual triathlon involving an orbital skydive from 60km above the surface, a 5 kilometre EVA suit "run", and a 25km all-terrain vehicle drive to the finish [7].