Lieutenant Commander Jona ch'Ranni, an Andorian chan, is the former Chief of Operations aboard the USS Gorkon. He is currently on extended leave while teaching at Starfleet Academy.

Jona spent his youth on Andoria but developed a taste for Terran cuisine and culture despite his traditionalist parents' objections. He spent many summers exploring the network of ice tunnels and caves near the Ranni clan holdings and has lamented never learning to ride a bike as a youth.

When he applied to Starfleet it was against the wishes of all four of his parents. Spel and Mir were the more vocal of the four to object. This has led to a somewhat strained relationship with them because of their ongoing disapproval. This rift has begun to heal over time as they see him excel at his new path.

Jona displayed a natural ability at piloting and served for a year aboard the Andorian dilithium freighter Verlaxi to gain experience before attending the Academy. At the Academy flight school, he earned the callsign "Mash". This was a playful jab from his classmates at the way he enjoyed his steamed tuber root.

His hobbies include playing three-dimensional chess and reading Andorian and Terran historical novels. He also enjoys physical activity including rock climbing, cliff diving, and Parrises Squares. He is eager to learn and gain life experiences. He can be somewhat clumsy when nervous but covers with humor even in serious situations. Jona is fluent in Graalen (Andorian), Federation Standard and Klingon and has intermediate ability in Bolian.

This af﻿ter action report represents an analysis of a tactical maneuver used on Stardate 239601.03 by the USS Columbia NCC-85279 while engaging an unknown assailant in the Delta Vega system. The attacker began an unprovoked assault on the Nebula-class cruiser. The Columbia’s captain ordered the use of Attack Pattern Omega Seventeen (O-17) in an effort to respond to the threat. This report analyses this tactical response and suggests the strengths and weaknesses of this maneuver.

Omega Seventeen involves a ship of cruiser or greater size flying straight at an enemy. This generally reduces the surface area that can be targeted as distance is closed. When a distance of ﻿one kilometer is achieved the ship is sharply corkscrewed to the starboard (right) in a sweeping arc. Footnote 1 As the ship accelerates to one quarter impulse through the curve the ship is completes its spiral at a positive Z position. The ship cuts across the nose of the attack in a diagonal. This provides a maximum amount of exposure for the ship to target and fire its weapons broadside at the attacker while making use of all three dimensions of space flight as a defensive measure.

The vulnerability of this maneuver is that it places the ship momentarily point-blank in front of the attacking ship, though this time is at a minimum. In addition, if the assailant's ship is in motion relative to the ship performing O-17 it can throw off the calculated vectors used to place this strafing run's alignments. 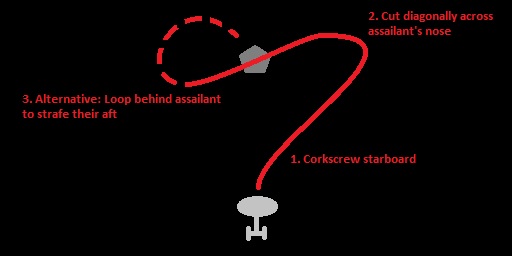 Variations in the maneuver can provide for a more successful execution of this tactic. For example, when cutting across the assailant’s nose, ship speed can be randomized positive or negative to counteract the opponent’s target lock. In addition, immediately after completing the maneuver the ship is ideally placed to execute a loop that could bring the ship aft of the target, allowing for an easy second weapons strafe. Footnote 2

Attack Pattern O-17 remains an effective and versatile means of maximizing a ship’s weapons engagement while minimizing exposure to an enemy’s threat radius. Its successful completing puts a ship in a prime spot for varied response or disengagement as the situation warrants. It is recommended that all helmsman make this a standard pre-programmed response for their vessels.

1: If the maneuver is reversed and the ship is banked to the port (left) then it is considered Attack Pattern Omega Sixteen (O-16).

2: Alternatively, the ship has the option to warp out of the engagement at a direction opposite of the attacker’s direction of flight. This maximizes the response time of pursuit by the attacking ship.

I'm officially an ensign in Starfleet. I can't believe it! That final simulation was intense. Commanders Delano and Mei'konda had us on this holographic ship and everything went haywire. There was a ship that appeared on sensors and then there were these spider-like bugs that were feeding off the energy from the warp core. We had to abandon ship and head for the alien vessel. It was so real I almost forgot it was a holographic test. Looking forward to news of my assignment. The admiral says the duty postings will be available within the week. You know which ship I have my fingers crossed for! I tried contacting my charan but he refused the transmission. One day I hope to heal the rift with my parents.

Not in my wildest dreams! Well, maybe my wildest dreams. I never thought I'd get my first choice of assignments! I ship out for the USS Columbia later today. They are on the way to a remote sector - the Sagittarius Reach - so my transport needs to leave right away to catch up with them. I can't believe I get to pilot the Columbia. I've been following every article on the FNS about her refit and now I get to fly the thing! Awesome!

I got called up to helm duty during alpha shift. Normally that wouldn't happen except most of the senior officers are gone on an away mission. The scuttlebutt around the lounge is that the captain is missing and they've mounted a search and rescue mission for him. I hope he's okay.

We received troubling news from the surface of the planet. Some unknown woman responded on Commander Ezo's comm. I hope its not one of the suspected Augments. They are no doubt a nasty bunch if the historical reports are to be believed. We have only just now re-established contact with our away teams. Commander Thoran ordered the ship into the planet's atmosphere as a show of strength. Less than a month on the ship and I'm already piloting the thing into a planet's atmosphere! I can only imagine what the ship must have looked like from the ground ... like some celestial chariot rumbling across the sky. Can't wait to see what's next.

We finally made port at our first official stop in the Sagittarius Reach: Dehner Base. The captain and XO and a few science types are going over for an initial visit and I've been asked to ferry them down in a shuttle. I'm interested to learn more about the personnel here. The captain seems to have a curious dynamic with the lead scientist - Sellards, I believe. Not quite what you would call mortal enemies ... but close.

I've been getting to know one of the scientists here at Dehner Base. Vexa zh'Lev. I can't describe her. She's amazing. Such a gorgeous young Andorian girl ... and brilliant too! She's researching the Galactic Barrier which is perfect for her focus on energy fields and their interactions with biologic matter. We have a date tonight at the bar. If I can just avoid embarrassing myself and pay attention to the conversation instead of acting like a bumbling, lovesick flyboy ...

We just had an encounter with an unknown aggressor. They've disabled our engines and I'm going below to Deflector Control where Lieutenant Commander Solis and I will try to initiate an ionized nadion burst in an attempt to blind them. I hope this works ...

I think I've found my new favorite place on the ship. The Astrometrics Lab is amazing! You can alter the graviton fields in the room so that you can actually float among the star projections. Not quite the level of the holodeck but very close. Pholin Duyzer played a little trick on me while we were in there today and pretended to fall from the raised platform - only to float up again. I'll find a way to get back at him.

I am both ecstatic and confused. The captain just informed me of my first promotion. I never thought that it would come so soon. It is a humbling experience to be recognized for your hard work. I'm trying to contain myself and keep a level head. There's an old Terran book that I remember a quote from. "Pride cometh before the fall." Well ... I'll try not to let that happen. Oh yeah, and Colquhoun and I broke our replicator. What a mess! Hope I don't get into too much trouble for it.

We've been traveling for a week now toward the Losarian homeworld. I must admit I'm eager to learn more about this race of people. I'm trying not to let the first impressions of the their species get clouded by our interaction with the pirate Captain Tarius Kaironn. Gods, please don't let me accidentally injure the royal puppy or cause some other intergalactic incident.

I just came from the awards ceremony where I was promoted to Lieutenant and appointed as the Assistant Chief of Operations. It was more surprising to me the sense of camaraderie and family I felt afterwards standing and looking out at the stars with the Captain. I can't imagine being anywhere else but right here.

I still don't understand it. The Columbia wasn't even damaged that badly in our fight with the Ya-Grhan! And now Starfleet is recalling us and decommissioning her. The old girl deserves better. I just received my transfer orders to the USS Gorkon. I knew this day would come. I have to say I'm not looking forward to it. And Vexa is beside herself. What's next?

Our arrival at Giáng Sinh has afforded us a welcome bit of rest from the chaotic experience in the 'alternate reality' forced upon us by Q. I'm looking forward to the snowy landscape of the research station and getting to know the crew of the Gorkon better. The strange thing is that I've had interactions with some people in that reality that I've never met! It's pretty confusing. I need a drink ... and maybe a counselor.

I just arrived back from the beachfront celebration. This mission was a difficult one. What does this new foe mean for the likes of Vaeron and the Romulan and Federation colonists there? Only time will tell. I hope Starfleet can provide a more active presence here in the long term. I can't help but feel that we haven't seen the last of these fungus creatures. On a happier note, I was rewarded by Admiral Reynolds with three new service ribbons. I'm getting quite the collection! The Department Chief one is my favorite. It's the most plain-looking but it's recognition for doing what I love. I can't imagine being anywhere else right now. Except maybe back on Dehner Base with Vexa ... gods, Computer, delete that last sentence.

The Admiral awarded me the Gold Lifesaving Ribbon during our end-of-mission celebration this evening. I'm not sure I deserve it. I just did what I had to do. Pira was in danger and I reacted without thinking. She would have done the same. Anyone would. That's what Starfleet's about, right? Doing the right thing?

I received a promotion last night to Lieutenant Commander. I have to say that this came as a surprise. I'm still plagued by doubts about the mission to Nassau. I lost control. An Orion woman named Zhila overpowered me with her pheromones. No! Stop it! That shifts the blame. It's my fault. Am I even deserving of the two pips I had, let alone another? I think I need to talk to someone about this.