Doctor Erin Reynolds is currently the Research Coordinator aboard the USS Gorkon. She has also served as its Chief Engineer, Chief Science Officer, and worked as a botanist on the Tyrellian Ark World, Ereina, and formerly held the post of Chief Engineer aboard the USS Triumphant, in an alternate universe where the Federation lost the Dominion War.

Erin Reynolds, born Quinn Reynolds in an alternate universe, came aboard the USS Triumphant as an fresh ensign, and was subsequently promoted up to chief engineer, though that had much, much more to do with her technical skills than her people skills. She was, however, an incomparable genius when it comes to keeping the ship running, and her long service aboard afforded her an intimate knowledge of its systems, quirks and limits.

Shy, introverted and awkward, leadership did not come easily to her, and she leaned heavily on her senior enlisted to maintain order in the department. Her friends are few, but she is fiercely loyal to those counted among them.

Unwilling to engage in violence, she was often considered a coward until a few years ago, when she suffered severe injuries pulling her engineering crew out of a compartment filled with plasma fire. The engineers on the ship respect her for that, if nothing else, and on the rare occasions when she's down to her uniform tank, the twisted and puckered skin of healed burns are still visible along her right arm, shoulder, and the nape of her neck, disappearing underneath her clothes (where they continue to cover a large portion of her torso on the right side and back).

She accompanied the USS Gorkon when it returned to its home universe, having lost all hope of ever making a difference in her own. There, she chose to make a fresh start: changing her name and career in an attempt to leave the past behind. 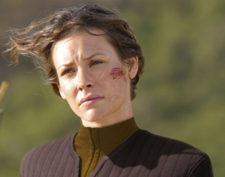 In her home reality