From 118Wiki
Jump to navigation Jump to search
This page or section is undergoing an expansion or major revamping. .
This notice was placed here by Lephi. Please excuse the crudity of this model. I didn't have time to purge the exhaust manifolds, and refine the matter/anti-matter ratio.

Lieutenant Lephi is currently serving as an engineer at Utopia Planitia Fleetyards.

She is extremely ambitious, persistent, determined and somewhat stubborn. She is a hard worker, often to the detriment of her social life, though her growing friendships and budding relationship are beginning to change that. Being a woman on Ferenginar, she has been a people pleaser to a fault for as long as she could remember. She carries herself with a sense of hard earned pride, viewing herself as something of a trailblazer for female Ferengi officers in Starfleet.

She was raised in a world of commerce and trade, leaving her diplomacy and speaking skills finely honed. She is data driven and results oriented. She puts all she has into everything she does and doesn't settle for anything less than spectacular. Spending as much time as she has travelling the galaxy, her linguistic skills are sharper than most people her age. She is eager to please everyone in her life and is fiercely loyal. She is very good at pretending she is okay, even when she's not.

Despite outward appearances, Lephi is plagued with self doubt and internal criticism. Most of the time she can keep these things under control, but certain stressors and situations can cause her to spiral. She holds herself to rigorously high standards, sometimes to her own detriment. She has a bit of a quick temper when she feels she's been slighted, and often resents people she feels do not work as hard as she does. Often times she is guilty of taking herself too seriously, though she definitely knows how to have a good time in the right situations. Spending her whole life making deals and negotiating with every alien she came across has honed her ability to manipulate others, and she often uses it to get things she wants 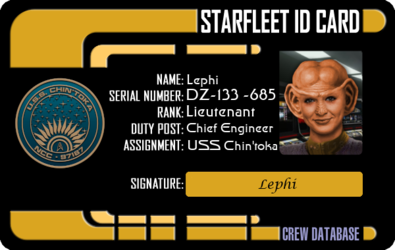