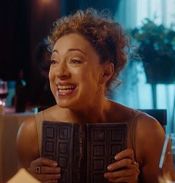 On his 22nd birthday, during a family gathering, talk turned to his absent father. A careless comment led Sylvek to discover Sylvik's 'logical' decision before he was born. Sylvek's opinion towards Vulcans and their logic, already not exactly great, was instantly soured. The same day, Sylvek began the process to legally change his name to 'Loxley'.

A year later, on his 23rd birthday, Loxley submitted an application to join Starfleet. Loxley dreamed about being at the cutting edge of medical science, hopefully making breakthroughs of his own one day. He sees Starfleet as the best opportunity for that goal – exploring new space, encountering new and unique situations and circumstances.

Loxley was a newly-qualified medical doctor before he joined Starfleet. He had originally trained as a research scientist (specialising on biology and genetics) on Earth but after taking a medical science module which included several months visiting Starfleet medical facilities around the galaxy, including Deep Space 17, Lox changed his focus to medicine. His education included internships at a couple of major hospitals on Earth. Lox graduated medical school aged 22 and applied to Starfleet Academy less than a year later.

Loxley has been a minor contributor to some medical research papers since graduating. In 2397 he co-authored a paper with Arlo Thornton on the mushroom spores the Gorkon crew encountered on Vaeron and how to use caffeine to inoculate the planet's miners against the effect of the spores.

In 2398, Loxley participated in an undercover mission to locate the 'missing' Admiral Reynolds. Lox took on the role of the Vulcan Dr Vaath, a chemist with Behemoth Pharmaceuticals specialising in ketracel white. In his spare time, Lox likes to tinker with Vaath's history and credentials, brushing up on his knowledge, just in case the disguise is ever needed again.