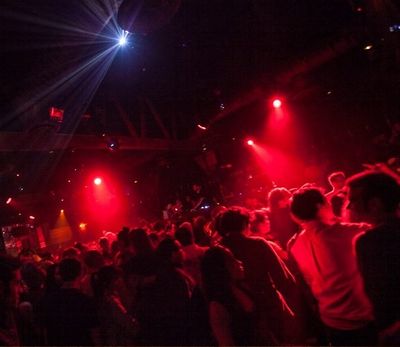 The Raven was a self proclaimed 'vampire' club. It was always dark, always smoky (the regulars called it 'fog' but it smelled faintly like tobacco mingled with chocolate covered strawberries so Janker couldn't help but think of it as 'smoke') and always full of pulse-pounding music. It played up the hedonism of the vampire mystique, full of youth who wanted their angst with a side of red-tinted alcohol and lust. ~MSNPC Janker

Located in the Dungeon area of Starbase 118, The Raven Club is a self-styled Vampire club that plays off many culture's oral history of horror stories and monsters. Draped in red velvet, sweet smelling fog and eternal darkness the Raven Club is both seductive and completely campy. It's owner, Philomena Drake holds a civilian psychology degree and believes in catering to her customer's sense of fantasy and escapism.

It caters mostly to older teenagers and twenty-somethings who want a place to relax, get away from it all and immerse themselves in a fantasy for a few hours. The club is known for it's overly loud music (contained by soundproofed bulkheads), sweet cocktail drinks and a menu where most of the food and alcohol looks like blood or body parts. This is all fake, the bar doesn't even stock bloodwine since most of its clientele aren't interested in the taste of blood, they're interested in the fantasy of being a sexy, tormented creature of the night.