The Haunting (Embassy of Duronis II) 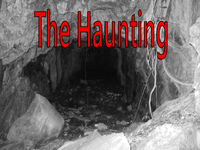 It is a time to rest and recuperate for the crew of the USS Thunder NCC-70605-A. With the arrival of their new liaison to the Laudean government, Ambassador Della Vetri has a lot on her plate when it comes to working with the people of Til’ahn. Though the planet has calmed since the invasion of the bluegills, distrust in the motives of starfleet is still there.

Another issue had been thrown at them. Ensign T'Ana, the aide to Lt Cmdr Nugra turned out to be really a Romulan assassin that turned herself in to Lieutenant S'Lone Tr'Khellian instead of carrying out her mission. She told the command staff of the USS Thunder that her mission was to kill Fleet Captain Toni Turner, but changed her mind for an unknown reason. Now being held in the marine brig, security and intelligence now must find out what shadowy plan they may be facing.

The situation did not improve when a hidden saboteur made another attempt to kill the command staff and the already apprehended assassin, who offered little during her interrogation, but signs point to a more even sinister development, one which had the ability to endanger not only the Thunder, but Duronis as well.

The Embassy, Duronis II Away team continued to explore the archaeological digs in the Quentisi Mountain Range. Going deeper into the mountain via a subspace elevator, the team found themselves in an inner cavern and the discovery of a glowing cube. Taking the cube in custody, the team soon found themselves under attack by small metal creatures which could meld themselves together and form ever larger, more menacing forms. During the furious fight which erupted, several members of the away team were injured, most critically being Commander Nugra. With the team now fighting for survival, efforts turned to escaping the caves and the metal sentinels which guarded it. Rigging a device which held the creatures at bay, Major Parker tried in vain to get the power up and running...but the creatures had other ideas. Left with no other choice, the team made their bid for escape, fighting their way back to the ancient elevator just as one of the metal monsters was about to swoop down on them...and the explosives planted by the away team detonated, destroying the caverns and the metal creatures as the away team made a run for it from the collapsing cave.

Meanwhile, back at the Embassy, talks between the Romulan diplomat and Ambassador Vetri took a turn as they decided the fate of the Romulan assassin, T'Ana. Laudean Prime Minister Daysa also made a claim to keep T'Ana on Laudean soil, as an accomplice to the second assassin who killed his butler. Other claims to keep T'Ana were also made, which further complicated the Ambassadors' mission.

Meanwhile, the second assassin, now identified as a Starfleet traitor, committed a horrific act and is now loose on Embassy soil, and a new member of the crew is causing ripples with his arrival.

Prof. Kavlin Basai is the leader of the archaeological expedition.

Dr. Ijan Goyard is the team leader of the archaeological part of the expedition.

This section of the mission file is to give people information about items, locations, and other things that deal with the mission. Please create a separate header for each relevant piece of data.

Ode to the Sky

A ancient book discovered in the tomb of Hapha Myn. It is written in ancient Til'ahnese and tells a story of an ancient winged people who shared the planet with the people of Til'Ahn and took pity on them when succumbed by a plague. These winged angels cured them and shared with them ways of farming and building that would alleviate the rampant diseases that swarmed the land.

They built a magical temple that could be only accessed through the Door of Song and it held great treasures[Editor:Can be translated as riches or knowledge].

The winged Angels mysteriously vanished one day after a bright light emanated from the temple and it was said that the skin of many that lived around the temple felt as if insects were crawling on their skins.