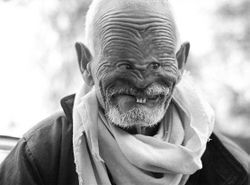 Background Prior of Ops

When Wyrk was much younger, he use to be one of the good guys. Always driven to helping people. Unusually skilled with communicating and advising, he took up counseling. First at home, where he knew most of the people and with no medical background.

People use to travel to talk to him, mostly because he very nearly free. He went to school and moved to a planet that bordered the Cardassians. A mental health institute where he went to undergrad and later was employed. He started from the bottom and rose very quickly. He once had a goal for being the head warden for the institute. It was during this time that he became fascinated with old techniques and methods for handling the mentally unhealthy. Things like electric therapy and rewiring the brain. He studied it dangerously close.

And the Dominion war began.

The planet he had been living on for many years was forced to evacuate or be captured by the Jem’hadar. Perhaps he was stubborn or really wanted to help. Or perhaps it was just unlucky timing. Wyrk was one of many captured. He didn’t want to be hurt, and he didn’t want to die. So he spilled his guts - verbally. Every bit of information he could manage he told.

Such a skill made the Yridian valuable to the Dominion. They granted his mercy plea to be left alive, but in return he would be their spy. And that’s exactly what he did. Whatever he was told - whether he thought it important or not - he passed along to the Dominion and Cardassians.

In fact he did so well, he was rewarded. Praised even a bit by some. It was then the evil seed was planted in his mind - Wyrk could make a living out of this. A luxurious one, where no one would suspect the wiser. And he could even charge a small fortune too.

And then the war ended.

He was done on his luck with no one to work for. Counseling wasn’t exciting or interesting and the fire he had towards it years prior had long been snuffed out. So he found others - who would pay oh-so much for such valued information. The Orions.

He worked with a rather engorged Orion named Damarkus Omari who ran dilithium mines. It was then that he met Zel Rohan. A rather distasteful mutt. Wyrk knew details that led to the Cardassian hybrid being captured.

Background While on Ops

Prime realty on the massive station happened to be in a dark section already crawling with rats. The ‘Dungeon’ was a perfect place to hide in plain sight. Rarely visited by those asking too many questions, Wyrk found himself getting fat and happy. Well wrinkly and comfortable.

He brought with him enough surveillance and recoding and decoding equipment and programs to gather intel on the Klingons. Which he did, as well as border traffic with the Romulans and as much starfleet intel as he could stuff onto a PADD.

Every so often the Ops intel and security would come knocking on his door. He simply swatted away at them as if they were nothing but flies. After all he did run a real establishment there. And he did, bring in the highest ranking officers he could. Of course then relaying anything shared to those with the deepest pockets.

He hired a receptionist, Tomina shortly after arriving there. For a long while Wyrk did his best to keep hidden what illicit activities he was up too. But the woman - Betazoid - was tuned in from the moment they crossed paths. Little did he know she had her eye on him since he arrived. Not for his looks mind you, but for the money. She was covering for him looong before they became a team.

As of recently, the Intelligence office has been crushing down on him. And with the sudden withdrawal of the Orion Syndicate, he is forced to search for new buyers for his information. Something dangerous to do, because of the vulnerability he becomes during such a transition. Even Tomina is getting a little flighty…

The Dr. Wyrk's Counseling Center has a distinct outer appearance. The inside only modestly better. A very unwelcome feeling sets in right away. Something he uses to his advantage to keep people out to keep his real work hidden from pestering eyes.

There is a single receptionist, Tomina, an empathetic Betazoid who had her eyeballs tattooed completely black. She knows what's going on behind closed doors and plays her part. It gets her a rather large cut of the profit.

On the door frame there are notches, one for each time Starfleet medical tried to come knocking him down. He was a stubborn one, quite comfortable where he’s placed himself. It makes him both lazy and dangerous.