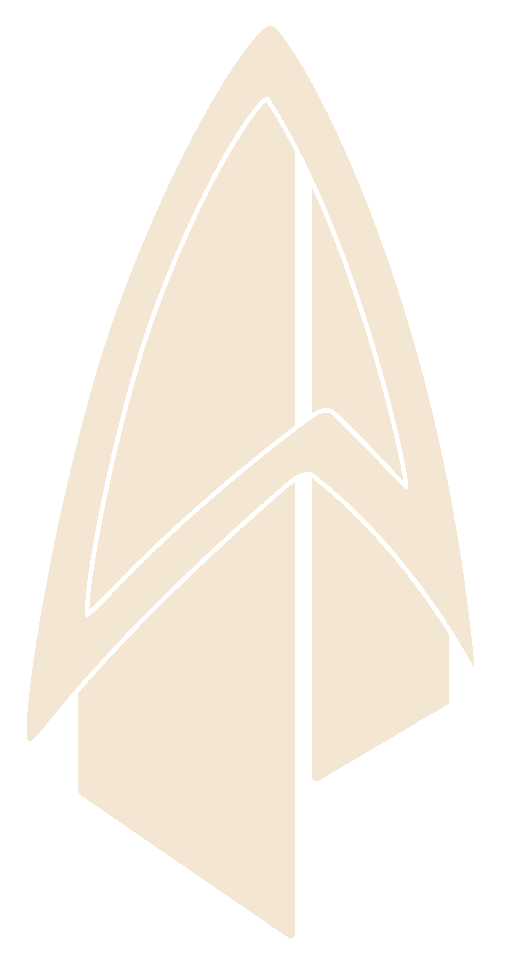 Aine Olive Sherlock is a Lieutenant Junior Grade in Starfleet. She is currently serving as a security officer aboard the USS Resolution.

Despite achieving high marks in school, Aine often feels self-doubt. However, her confidence is rising with every mission. At times can seem nervous, especially around new authority figures as she does not want to let them down. She will often bite her lower lip when nervous. When focused, seems to drown out the world around her, seeming to others to be “distracted.” Very rarely loses her cool, outwardly, as she tries to keep any panic internalized. Her prior preference of being alone in her off hours has changed with the recent friendships she's made. Her off time is often spent on hobbies: reading, playing violin, electronic tinkering. She is also an avid archer and won "The Robin Hood" award for high score at an interplanetary competition while on the Academy archery team. Enjoyed gymnastics and still practices as a form of exercise, though never took it too serious as a sport. Drinks recreatively on occasion, with the tolerance of an Irish dock worker on a Friday night. Having found a kinship with the character of Sherlock Holmes in her childhood, which also happens to be her families surname, she chose to study investigative science in secondary school...she has grown tired of the jokes and “comparisons” to one of her favorite characters. Loves a good mystery. She comes from a traditionally Catholic area, and it shows in some of her beliefs, though religion was not seen as important in her household. At times this can cause her guilt in the choices she has made.

Aine was born in the year 2374 in County Cork, Ireland. She was fairly sheltered as a child and her parents rarely had them travel outside of Ireland. She grew up on their family farm where her father grew fresh foods for the local community and her mother wrote, mostly novels and short stories. She took up violin and archery at a young age. Never practicing to the point she could be a professional at either. Had a habit of taking apart her fathers equipment just to see how it worked which lead her to tinker with various electronics. Upon graduating from secondary school, Aine decided she wanted to see more than just Ireland and decided bigger was better and told her parents she intended to apply for Starfleet Academy. Initially her parents were resistant to the idea as they feared for her safety, but when they saw that she didn't want anything else, they fully supported her. She barely got into the Academy on her first try. Because of their fear for her safety, Aine has a habit of keeping the dangerous parts of the missions out of updates to her parents.

While at the Academy, Aine took to piloting and initially figured she would go that route. Her first year she dated a Senior classman, now Lieutenant Melvin Hollis Martinson. Upon his graduation he decided not to continue the relationship. This left Aine heartbroken and she suffered from depression. Her second year she took on less course work and her grades suffered. She sought out counseling and overcame her depression. She also decided to major in Intelligence, harkening back to her love of Investigative Science. She initially chose to double major in Security, but due to her lackluster second year, she minored in it. Her third and fourth years she doubled down and took on extra courses. Near the end of her third year, she took The Romulan Mystique and developed a fascination for the Romulan people. This showed in her choice to take all courses available on the Romulan language, which she is fluent in, and focuses in xenology and xenobiology on Romulans. In addition to taking extra courses for her major, she took all available courses and earned a full course minor in Security. At the end of her fourth year, she was transferred to Starbase 118 to take her final test administered by Lt. Cmdr.'s Antero Flynn and Genkos Adea. She graduated on stardate 239712.12.

Assigned to the USS Resolution in 2397, the ship is sent to find the missing freighter, Andalucia. Upon entering the Celendi Nebula, the ship is pulled into a temporal anomaly which transports it 200,000-300,000 years into the future. They find the crew of the Andalucia was taken captive and enslaved on the planet Saural V. A small away team, including Ensign Sherlock, is sent down to the surface to find the missing crew while the Resolution, with Captain Nicholotti now out of action with an unknown ailment that appears to be an aneurysm, plays a game of cat and mouse with the Sau ship. The raid on the planet taking a wrong turn as Ensign Treetus is injured, a mutiny takes place on the Sau ship with it's former first officer now on a suicide run towards the slave camp. The team makes it out with what refugees the ship can hold and makes its way back to their time, with information sent to them by the Sau first officer. After they make it back, the crew takes their Captain to Vulcan for treatment while the crew takes leave. While having dinner at their crew member T'Suran's parent's home, the Captain makes a surprise appearance and presents the crew with awards and, in Aine's case, a promotion to Lieutenant Junior Grade.

Following shore leave on Vulcan, the Resolution was dispatched to assist in negotiations between the Thama and Nascaik over the ownership of the planet Vionus IV. Though, ultimately, the negotiations were successful, the mission was marked with difficulty. The Thama's delegate aide had a personal agenda in the kidnapping and attempted murder of one of the Nascaik delegates. The Nascaik delegate was successfully rescued. Post mission and en-route to DS224, Aine gave a self-defense class. Unfortunately, Crewman Hamsan Dwich was injured in the class. See: Incident Report.

239804.05 the Resolution is dispatched to the Briar Patch in search of the missing Starfleet surveyor the USS Hanno. A Romulan Senator tags along as they too are missing ships in the same area. The Resolution comes into contact, literally, with a rogue planet populated by the Skarn. Lead by a megalomaniac, Arbelo, the crew is at risk of being fed to a creature controlled by their leader. Aine, in a last ditch effort, uses her phaser as an improvised explosive device to kill Arbelo. In turn, the effect that is keeping power from moving on the Resolution is now disabled. An act which earned Aine the Captain's Commendation.

A returning officer currently serving aboard the USS Juneau. They met during their final test and Aine quickly developed a respect for his confidence and initiative, while not knowing he was a returning officer. She resolved to keep in contact with him no matter where either ended up.

Counselor on the Resolution, who is quickly becoming a friend. Aine is feeling, more and more, she can go to Meidra and is looking forward to spending time getting to know her more over their coming shore leave.

After a rough start getting to know each other, through no fault of either, Aine and Iljor have begun to get to know each other better and have spent some time enjoying each others company with other crew members during shore leave.

(Notes: Ribbons are displayed as would be seen on dress uniform. For award citations see HERE.)

Part of the crew spends its time helping to resettle the Romulan refugees rescued on the last mission to Oreen V. Upon returning, Aine has a surprise visitor in the way of Lt. Melvin Hollis Martinson, her ex from her Academy days...it doesn't go well. Luckily, another surprise visitor is someone she'd much rather see.

The Resolution is dispatched to the Briar Patch to find the missing survey ship Hanno. A guest onboard, in the form of Romulan Senator Vreya, informs them of two Romulan ships that have gone missing in the same area.

With their Captain grounded by Starfleet Medical and Addison MacKenzie as Acting Captain, the crew of the USS Resolution is sent Vionus IV to negotiate claim to the planet between the Thama and the Nascaik.

After making their way back to the present time, the USS Resolution takes leave at Vulcan. Captain Nicholotti, in a perilous state, is treated by Vulcan doctors while the crew attempts to distract themselves with the sights and locales of Vulcan.

Following a surprise visit by Captain Nicholotti during a dinner at the estate of a Vulcan Ambassador, the crew is given their awards, including a promotion for Aine to Lieutenant Junior Grade.

Called upon to search for the lost freighter Andalucia, the USS Resolution encounters a temporal anomaly in the Celendi Nebula. They are transported 200,000-300,000 years into the future where they encounter a violent race of enslavers, the Sau. Outgunned, the Resolution hides in an asteroid field while a small away team attempts to free and rescue prisoners of the Sau.