The valiant crew of the USS Resolution set out on a mission to find the missing freighter, Andalucia, and her crew. Was the Andalucia disabled? Destroyed? Or worse?

While investigating the disappearance of the freighter Andalucia, the crew of the USS Resolution are transported to another time and space.

Upon leaving Deep Space 224 after their shore leave, the crew of the Resolution are informed by their Captain that the freighter Andalucia has gone missing. With contact lost and no way of knowing, due to the nature of the Celendi Nebula, what the current status of the Andalucia is, the crew does their best with what little information they have. Planning the for the worst, each department preps and hopes for the best.

When entering the Celendi Nebula after finding a faint energy trail from the freighter, the Resolution is pulled into a gravimetric distortion. It quickly becomes apparent that this was the fate of the Andalucia as well. Despite their best efforts, there is no escape. All is feared lost before suddenly the ship comes out of it in one piece, mostly. However, they quickly find themselves a little off when it is discovered they have jumped thousands of years into the future. Now in a time they know nothing about, in a system they've never seen, with a ship unlike anything they are familiar with bearing down on them, they must find the crew of the Andalucia and make their way home.

The crew of the Andalucia has been taken prisoner by a lizard-like species, the Sau on Saural V. With the crew now split up and seeing how the Sau treat their prisoners, their Captain attempts to locate his crew, not knowing help is on the way.

Engaging in a tense standoff, the Resolution readied an away team to search for the missing survivors. After being fired upon by the Sau, the Resolution jumps to warp in a two stop maneuver. First stop, beaming down the away team to Saural V. Second stop, asteroid field hoping the Megalana does not find them.

While planning their next move, the crew onboard the Resolution is shocked by the removal of their Captain from the bridge. Beamed to sickbay for what appears to be a neurological trauma, and with Lieutenant Commander Iefyr Farrel in command, they continue on with a plan to keep the Sau stalled. In Sickbay, acting Chief Medical Officer Kyle Morgan along with Meidra Sirin and T'Suran, prep for surgery on Captain Kali Nicholotti. Meanwhile the away team is having issues of their own. After initiating an assault on the compound on Saural V, they are now split up as one of their own has sustained a severe injury, losing half his arm to a close range disruptor blast. Commander's Addison MacKenzie and Tai Ilsam venture forth as Doctor Genkos Adea tends to Ensign Callium Treetus' injury while Ensign Aine Sherlock assists and stands guard.

While prepping their game of cat and mouse, Lieutenant Commander Farrel receives a message from Teril. He has killed the Captain of the enemy ship and is now offering his assistance to the Resolution. During the exchange on the bridge, Sickbay gets to work to surgically repair an aneurysm in the Captain's brain. The team on the surface is given the message that now is the time to get everyone out of there. A hasty escape is planned and executed. The prisoners are sprung from the facility, under fire, to be transported away by the Resolution.

Upon their escape, not all of the prisoners were able to be beamed aboard the small ship and the Resolution was forced to depart or face two incoming Sau ships. Having done all they could, they make a break for the anomaly. Using the information sent by their recently allied Sau, Teril, they open the anomaly and, luckily, make their way back to their time. Back to safety, the crew makes their way to Vulcan to treat the Captain and begin their shoreleave.

Lo'Thar is a slight Sau, a lizardish species. He grew up in relative happiness, joining the Sau space force when he was relatively young. He has had a quietly successful career, seeking neither power nor glory, but serving his species faithfully for the past 60 years. He is a quiet commander, thoughtful, and prefers to consider his actions carefully before striking. However, once he does decide to act, he acts remorselessly and swiftly. He is involved with Sh'erat, who was chosen as his mate when they grew to adulthood (around age 20). They don't have children, and don't plan to as they are both focused on their careers. He is in the Sau space force, and she is a research scientist.

Teril left his father, Borgh, behind to find his fortune at a young age. His mother died giving birth to him, and he's never been known to form close attachments. His loyalty lies with whoever can provide the best reward.

Cormac comes from a long line of shipping captains, able to trace his lineage back to 19th-century Earth when humans were still shipping goods via the oceans. Always one for adventure, Cormac is the first of his family to operate on the outskirts of Federation space and has been transporting goods and people throughout the Borderlands for over five years.

Roshnir, son of Idris and Mahi Stonsel, was born on Kaelon II in the province of Aldnar in the Northern Hemisphere. The son of a farmer, Roshnir helped his father and mother on their farm until they undertook the ceremony*.

Although farm life had been all that Roshnir had experience of, an unexpected twist of fate led to a ship crash landing in one of his fields while he worked the land. Upon searching the downed ship, Roshnir found Lak'D Nir. Roshnir took the unconscious Argosian back to his farmhouse and tended to him until he was well enough to attempt to repair and leave the planet. During this time, Lak'D Nir witnessed the brutality of life a Kaelon farmer. Seeking to help Roshnir, he invited him to join him on his ship. Roshnir was initially skeptical, but the sudden and brutal attack that led to the deaths of both his wife and son drove him to accept the invitation.

Roshnir served as Lak'D Nir's second hand onboard the Denaris for 5 years before fate, yet again, dealt Roshnir a bad hand.

On a trade expedition to Kavaria, Roshnir and Lak'D Nir were attacked by a Breen scout group, Lak'D Nir was killed in front of Roshnir as a demonstration of their superiority, Roshnir enslaved and served the Breen for eight hard months before he was later sold on to the Sau's where he now finds himself. 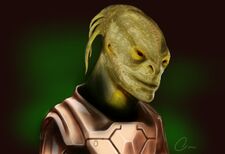