The Ties that Bind (Resolution)

With their Captain grounded by Starfleet Medical and Addison MacKenzie as Acting Captain, the crew of the USS Resolution is sent Vionus IV to negotiate claim to the planet between the Thama and the Nascaik.

The Thama Scientific Sovereignty, a people of science and exploration want the planet Vionus IV for medicinal and scientific research. Meanwhile, the Nascaik Defense Coalition wants rights to the planet for mining related to their military agenda. Lieutenant Commander Addison MacKenzie has been given temporary command of the Resolution and tasked with mediating the negotiations.

After briefing the senior officers, Commander MacKenzie works with Counselor Meidra Sirin and Ensign Etan Iljor to determine a plan of action and the motivations of the Thama and Nascaik. Commander Genkos Adea, likewise, teams up with Commander Rune Jolara, Lieutenant Yogan Yalu, and Ensign Hallia Yellir to determine what each side wants with Vionus IV and if there is a way for the planet to be shared. Meanwhile, Commander Chandra Amari, Commander Tai Ilsam, Lieutenant Aine Sherlock, and Doctor T'Suran try to figure out a way to get everyone in the same room to talk with the low gravity needs of the Thama and the methane breathing needs of the Nascaik, in addition to security needs of a tense diplomatic negotiation.

The Thama and Nascaik have arrived and some of the senior staff have been assigned as tour guides before the negotiations begin. The Nascaik seem less than enthused at the idea, but go along nonetheless. Meanwhile, a team led by Doctor Adea, consisting of Commander Jolara and Ensigns Yellir and Etan, will be beaming down to the surface of Vionus IV to see if they can find out exactly what either species is seeking to gain from the planet.

Thama delegate Niran has come down with a mysterious "illness" and sent her aide, Ashal Koas in her place to the negotiations. During which it is revealed that the Nascaik want the planet to stem a "humanitarian crisis." Commander MacKenzie calls into question the motives of both sides. Meanwhile, the officers gathered on the bridge are attempting to root out minor system failures that are cropping up around the ship.

The away team on Vionus IV, now joined by Ensign Nox, is finding little in the way of leads given the limited information from the delegates. Astatine ore in high deposits seems to be the only valuable mineral they've found. Until coming across a probe with a yet to be determined origin, that appears to have been shot down.

During a livening debate over Viouns IV, Ashal Koas hatched her plan. Leaving the Resolution drifting and without power, she chemically paralyzed Ar-Dev. Blowing out a viewport in the Briefing Room, she stole away with the now paralyzed Ar-Dev into a programed shuttle to make her escape.

Ashal Koas has taken Rossk Shes Ar-Dev to the lost colony of Aspiration. The Thama and Nascaik have agreed to allow the Resolution to attempt a rescue of Ar-Dev and apprehend the, now, terrorist Koas. The Resolution limps towards Aspiration running on partial power and the crew make their plans for the rescue.

While a small away team heads down to Aspiration to retrieve Rossk Ar-Dev, and hopefully his captor, alive. Commander MacKenzie lays down the law to the delegates after Ensign Etan's research reveals the truth behind the Nascaik's desire for Vionus IV.

Scientists, Engineers, and Doctors work out a treatment for the Resolutions allergic reaction after the rescue team returns with Ar-Dev alive. Ashal Koas, now a victim of her own weapon of terror used to threaten Ar-Dev on Aspiration. The negotiations continue when the truth behind the Nascaik's need for vital minerals is revealed to not only be the expansion of Hypermales, but that the reduction in Hypermales is also causing a recordable decline in the general population.

The Thama and Nascaik tentatively agree to a joint program for research into the plights of both of their worlds with a non-aggression agreement from the Nascaik and an transitional offering of two worlds taken by them from the Thama, back to the original settlers.[1] 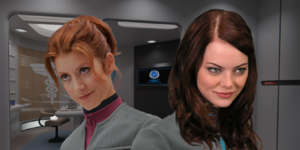 Born into a family of diplomats, Soaha was trained from birth as the older sibling to carry on the family tradition. She lived the life of a sheltered child, her days structured and filled with studies. Her interactions with others aside from her caretaker and her instructors were limited to specific individuals, usually at dull diplomatic gatherings. Daytime lessons included linguistics, leadership, communication, and culture classes. She holds degrees in Interspecies Relations and Planetary Law.

At a diplomatic function, her parents arranged for her to meet Lurtin Vopnal, a reputed politician from a good family. She hated him from the moment she saw him and, for the first time in her young life, rebelled against her parents and their decision to bond her to him. He courted her relentlessly in an attempt to change her mind, even composing a serenade in her honor which he presented in front of a rather large crowd at a diplomatic function.

However, what ultimately won her over was his unique perspectives on relations with the Nascaik. The relationship grew naturally from there and the two were bonded within months at a grand wedding witnessed by several of the planet’s key diplomats and politicians. Within months of the ceremony, the two were blessed with a son, Jarsin, who was and still is the spitting image of his father.

But their life together was not to last forever. Tragedy struck when, while Lurtin was visiting the Aspiration outpost on political business, the outpost was destroyed. She mourned the loss of her beloved and spent the years following dedicating herself to raising their son and to her career, hoping to bring peace between the Thama and the Nascaik.

The youngest daughter of the Koas metamours collective, Ashal was born and raised on the Thama colony of Aspiration, a sophisticated research outpost near the border between Thama & Nascaik space. From a young age, her intellect was considered remarkable even among an intellectual people, and at the age of seven she returned to the homeworld to begin attending an accelerated education program. She studied and continued to excel in the fields of nanochemistry, quantum physics and subspace mechanics. While physically distant, she maintained close bonds with family members and siblings until their death in 2389, when the Aspiration outpost was completely destroyed by a catastrophic fusion reactor failure. While Nascaik sabotage was suspected, a years long investigation was unable to find any concrete evidence of foul play.

Ashal shifted her academic focus immediately, pursuing topics like xeno-sociology and interspecies diplomacy with an almost fanatical zeal. She holds five advanced degrees but turned down several prominent academic and research opportunities to join the Thama Diplomatic Corp, where she intends to work diligently on the contentious relationship between the Thama & Nascaik.

Shes Ar-Dev is a Nascaik officer in the Planetary Expeditionary & Defense Forces, currently holding the rank of Rossk (equivalent to a Starfleet naval Captain or marine Colonel). Genetic testing prior to his birth indicated that Ar-Dev would be born hypermale, a rare third biological sex of his species. As with all hypermales, within minutes of his birth, Ar-Dev was separated from his biological parents and raised by the state.

A product of the hierarchical Nascaik society, Ar-Dev’s entire existence was preparation for military service; he literally knows no other life. At the age of ten, he left the state education facility and was sent to live with Rossk Hau Rep-Vu, who became his military father and raised him in his own image. Ar-Dev’s years of programming and training allowed him to bypass the Academy of War altogether, and he was commissioned as an officer at the age of 19. Having had no other education, he possesses few skills or interests beyond military strategy.

Ar-Dev believes strongly in the Nascaik expansionist philosophy, and takes pride in having been personally involved in the conquering of several neighboring planets. With few resources remaining on the overfarmed, overmined, overdeveloped Nascaik homework, he sees the exploitation of other planets as necessary to his species’ survival.

Malyk is a Nascaik aide in the Planetary Expeditionary & Defense Forces. Holding the rank of Terza, the equivalent of Commander within the administrative section of the forces. Genetic testing prior to her birth, along with cognitive testing as a newly born showed potential aptitudes that put her in a small percentage of female-born Nascaik who were then bred to serve highly ranked hypermale members of the PEDF leadership. As such, she was removed from her home and began training for her role at the age of 3.

At the age of 12, having lived with and having been raised by the current leader of the PEDF administrative corps, Malyk was sent to the Nascaik Academy of War, where she studied until she was 17 and graduated with marks that put her in line to be the next leader of the administrative corps. To work towards that end, she sought out one of the most prestigious assignments for someone of her position, the aide of one of the most promising hypermale leaders of their generation. Granted the assignment, she met up with Shes Ar-Dev not long after his commission as an officer. The two have worked together since, with Malyk serving as his aide.

A firm believer in both the vision of her people, as well as the work and beliefs of Ar-Dev, Malyk strives to be the right hand of the hypermale Rossk that she was raised to be.