Captain Kalianna Nicholotti now back in command of the USS Resolution, the ship sets out for the Briar Patch in search of the mission Federation survey ship Hanno. Senator Vreeya of the Romulan Star empire joins them to search for two missing Romulan ships that appear to have met a similar fate.

A visitor to the Resolution in the form of Senator Vreeya of the Romulan Star Empire, has come aboard to observe the rescue of the USS Hanno, a Federation survey ship. Informing the crew that, coincidentally, Romulan ships have gone missing in the same area of the Briar Patch. With the Resolution en route, the crew makes preparations. Etan Iljor, Hallia Yellir, and Tai Ilsam research the dangers of the Briar Patch to best prepare the ship. Yogan Yalu assists in Engineering with Chandra Amari in modifying the ships systems to best perform in the hostile environment. Genkos Adea, Meidra Sirin, and Aine Sherlock make plans to inoculate away teams and crew and to evacuate areas of the ship for survivors.

With preparations done, the Resolution arrives at the Briar Patch. Upon entering they find a rogue planet with trace readings indicating a ship or two have been there. As they approach they are hit with a gravitational wave and pelted by rocks. With various systems now losing power for unknown reasons, Captain Nicholotti orders a Blue Alert.

The ship had a hard landing on the surface of the rogue planet. Lieutenant Yalu, seemingly affected by the energy from the planet is in sickbay. Commander MacKenzie has the bridge while Captain Nicholotti takes over Sickbay to send out a team lead by Doctor Adea to find the crew of the Hanno.

After arriving at the Hanno, the away team finds the area to be recently abandoned. After being "attacked" by a rock-like creature, they follow its escape route only to find it was with the remains of the Hanno and Romulan survivors. Dr. Adea decides to send Lieutenant Sirin, who seems to be negatively affected by the Skarn's telepathy, back to the Resolution with most of the survivors. Adea, Yozal, Etan, Sherlock, and Gabbro pay a visit to Arbelo, the seemingly insane and homicidal protector of "the stone." Meanwhile, the team back at the Resolution continues to try and solve the problem of getting power to the ships systems with an old timey solution: lead.

While "visiting" with Arbelo, the team is threatened with being fed to Baab. Baab seems to be an creature living in a pit in the cave and when fed living creatures it seems to charge the power in the "stones" Arbelo seems obsessed with. When Arbelo summons more Skarn and attempts to muscle Yozal, security officer Sherlock volunteers to be fed to Baab, but she has other plans. Exposing the power core of her phaser and tossing it down into the pit after attempting to telepathically communicate her intentions to Gabbro, the team makes a successful and dramatic escape from the cave. After taking stock of their well being, Etan finds that his tricorder is now functioning.

The group makes their way back to the Hanno as they receive a call from Commander MacKenzie, with power apparently restored at the Resolution. With the survivors already at the Resolution, they are split up for those who need medical attention and Commander MacKenzie intends to volunteer them to help with repairs to the ship so they can depart as soon as possible. With everyone safe and sound and power now mysteriously back, the crew and their guests repaired the ship enough for it to be spaceworthy. They depart the planet save for one, Ferzdy, who has decided to live out the rest of his days with his new friends, the Skarn.

Ferzdy is old, infirm, and nearing the end of his life. Although his body is failing him, his mind remains focused and sharp, the result of decades of service in the former Empire’s military, political, and intelligence services. But that was a long time ago, and probably not relevant. When most people look at Ferzdy, they see just an old, old, old man.

Having outlived his entire family, many of whom perished in the destruction of Romulus, Ferzdy has learnt to cope on his own, and has developed a knack for convincing well-meaning strangers to help him get by. After a decade of drifting from place to place, he located a relative on a distant colony who agreed to take him in, if he could only get himself there. His passage on the Romulan ship was just one leg of this long, multi-faceted journey.

Ferzdy knows that his best days are long behind him, but he is neither bitter nor resentful about this. He says that he is too old for caring about such things as the future of the Romulans, but there does remain a tiny bit of patriotism inside him that, under the right conditions, might sprout once again.

Ferzdy does whatever the Romulan equivalent of macramé is. It’s really all he has left that can make him smile.

From a young age, Talar was raised on tales of brave men and women in the Romulan Star Navy. His goal since childhood, to be one of them. Enlisting as soon as he was allowed, he soon became an officer after distinguishing himself in battle in colonial skirmishes. A young and promising career came to an end with Hobus. Talar gave up his promising military career to volunteer for a transport ship for the Empire. Feeling he could better serve his people helping them relocate and resettle. He was assigned to the transport Ekhesai as a junior officer before eventually becoming first officer.

While attempting to relocate refugees, including his new wife and himself, the Ekhesai approached an unknown Class M planet. As they did, what appeared to be random minor power failures, quickly escalated into complete power loss resulting in the ship falling from orbit and crash landing on the planet. A majority of the crew and passengers were lost. Talar has stepped up to lead the survivors. They will survive, and thrive, even if it means keeping themselves alive by the same methods as the primitives on this planet who attack them.

Appearance: In his natural state, Gabbro appears as a small ball of purple light, but usually he will be seen in his "exosuit" - a bipedal humanoid(ish) shape made up of rocks. Imagine the attached video, but way more simplistic. depending on what they need, the Skarn build these suits around themselves as protection/to interact with the world. Their telepathy, and the power of this new mineral, has improved these abilities

Gabbro came into being only a few hundred years ago, by Skarn standards they're quite young. They don't remember a time before the Skarn had this more powerful telepathy, that they use to create these bigger rock bodies. However, they fear it - they see that it's going to make them martial and violent. They have been trying, surreptitiously, to disrupt the mining of the mineral as they are frightened, esp. since the arrival of Federation members, and Romulans, that the Skarn will be the aggressors in an unnecessary war over the mineral.

Arbelo is a small dark blue light, with a crackling of ill humor within a shell of their true form. Think a tiny storm cloud with brief bursts of lightning within. They surround themselves with the sharpest rocks available when making their exoskeleton, almost daring others to bump up against them so Arbelo has a reason to challenge them. They are cunning, fiercely protective of the planet and the magic rock that helps the Skarn see the thoughts of others. Arbelo does not like outsiders and will do what is necessary to either destroy them or get them to leave.

Arbelo has existed for six hundred rotations around the large orb that floats in their sky. They well remember the finding of the ‘thought rocks’ and being given the honor of guarding it from those who would take it from them. The leader by their own proclamation, they are determined to learn who is disrupting the mining of this mineral as the Skarn need it to maintain their power over the other lifeforms on the planet. 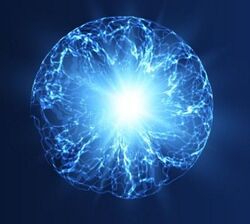 Raised in the aftermath of the Dominion War, Yozal Arrens grew up in poverty. The only son of farmers, he wasn’t academically minded in his youth. His parents, wanting more for their son than to continue in their footsteps, suggested he consider Starfleet as a means to secure a more meaningful future for himself.

Arrens was posted to the USS Hanno immediately after graduation. Despite being early in his career, he quickly rose to the rank of Lieutenant and is one of the senior-most security officers on the science vessel.

Emma is an only child of two civilian scientists in charge of a research station in deep space. At her earliest opportunity, she applied for and was accepted into the Academy. As part of her accelerated coursework, she was assigned as a provisional ensign to a survey ship..the Hanno..because what could go wrong on a survey ship...?