Hunt for the Hulk (Arrow) 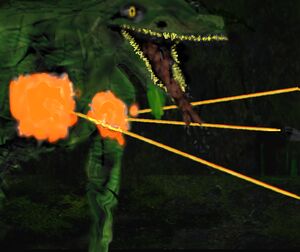 Hunt for the Hulk

The Hunt For The Hulk

What begins as a relatively simple and straightforward survey mission of a previously un-mapped section of the Alpha Isles, the crew of the Arrow are stunned to find something in the remote region of space that definitely shouldn't be there...

Starfleet tasks the USS Arrow with a simple mapping mission of a relatively sparse and unexplored area of the Alpha Isles. Most maps of the region are inaccurate and incomplete, so the ship prepares for a very long and somewhat tedious journey. As the journey progresses, long range sensors pick up something strange. Sensor scans are being refracted for some unknown reason, and all the astrometric data so far suggests that a remote area should be home to a star. However closer scans do not indicate a star at all. So what is causing the readings and what is refracting the scans? Gravimetric distortions bring the Arrow to impulse and the crew try to determine what indeed is out there. When the ship drops out of warp, Captain Shayne notices that something is blocking out the stars from further afield. A moon? A black hole? Something... Meanwhile, an opportunistic Ferengi Second Officer leads a small shuttle team to an ancient ship lost in space. He smells profit on the stale air and orders his men to search for it once they're in the cargo hold. Strange moss and plants have been growing on the deck and bulkheads - evidence that people haven't been there for many years. Suddenly, a loud and ungodly roar disrupts the scavengers search, and it becomes clear something terrible lies waiting on the ancient vessel...

The Arrow initiates a magneton beam to clear away some of the ionizing radiation, which clears up the sector of space they're in and reveals the presence of 'the space hulk'; a massive pyramidal ship the size of a starbase. It's estimated that it's a couple of hundred years old and has been stationery for about a decade. It seems to be made of some kind of stone, but a metallurgical analysis proves it's actually some kind of stone/metal composite.

Stalking the hulk is a Ferengi marauder - the FMS Fortuna - which takes a defensive stance against the Starfleet ship. Communications between Captain Shayne and DaiMon Slek reveal he is invested in the hulk and has sent two teams to evaluate and catalogue its contents for sale. Lt.Commander Maz Rodan forms an Away Team of Lt.Commander Serinus, Lieutenants Waters and R'Ariel, and Lieutenant JG Caden to investigate the ruined ship to determine whether it is derelict, and whether DaiMon Slek has a legal claim to it...

The Away Team arrives on the hulk, and encounters the strange ecosystem the ancient ship has created. There are bugs and other strange creatures living peacefully in the grass and moss covering the ship. The ship itself is found to be running on low/emergency power and Lieutenant Caden tries to restore power so they can explore further. On the Arrow bridge, Commander MacKenna attempts to covertly scan the Fortuna while simultaneously up-linking specific information from Starfleet Intelligence.

A Marine SAR team is sent from the Arrow to assist in the search for survivors on the hulk. Exploring the derelict, Rodan and the Away Team encounter a crazed Gorn, but no Gorn like anyone has ever seen. It attacks the Ferengi away team, whose survivors regroup with Starfleet just as Caden inadvertently trips an ancient security protocol which shifts the corridors and bulkheads into a labyrinthine maze. The away team is separated with Rodan, Caden, Jones and Grixon on one side of the maze, and Serinus, Waters, R'Ariel and the SAR Marines on the other. The Gorn is somewhere in the maze.

After some searching in the dark, R'Ariel rejoins the team, as Serinus, Waters and the rest of the Marines find the Gorn 'throne room', a large stony Throne Room in which a Gorn mother incubates her lone egg. Enraged by their intrusion, the mother Gorn kills two of the SAR team before her mate arrives.

Meanwhile on the Arrow, a deal is struck with DaiMon Slek to allow Collins and MacKenna aboard to deliver information about the Alpha Isles so Slek can conduct business there. Slek, on the other hand, relishes the idea of having an Intel officer on his ship, and begins underhanded plans to gain more information.

With MacKenna and Collins dealing with Slek aboard the Fortuna, Shayne enlists Lieutenant DeBarres to come up with a strategy of getting near the Hulk in order to dock with it and rescue the away team. She suggests echolocation, and soon the Saber class ship is sneaking past the Fortuna to get closer to Slek's prize.

On the Ferengi Marauder, MacKenna and Collins see the true intentions of DaiMon Slek, who planned to kidnap the Intelligence agent and steal secrets from her brain. As Shayne's patience runs out with the Ferengi, he demands they steer clear of the Arrow while they approach the Hulk. When he spots that MacKenna - Shayne's own fiance - had been manhandled by Slek, the Captain orders a full phaser assault on the Fortuna, with warp power channeled to the phaser banks. The Fortuna survives the blast, but the sneaky Slek orders his ship to self-destruct before fleeing - unbeknownst to Shayne and the others - to the Hulk with MacKenna and Collins.

After Maz Rodan is attacked by the Gorn, Jones and Grixon lead a valiant counter-attack against the beast, giving the away team enough time to fall back into the labyrinthine maze of the Hulk and make it back to the docking area. The bug - which for some reason feels attracted to Rodan - sprays an icy cold liquid on his wound, thus saving his life. As the away team approach their shuttle, they are unaware of the destruction of the Fortuna.

Escaping the Hulk with the assets he'd been commissioned to retrieve, Slek boards Bregg's shuttle in the cargo area and escapes the scene to rendezvous with his Gorn business partner. The prize he tasked his men with retrieving was a cache of Gorn eggs suspended in stasis. He beams aboard the egg from the Throne Room and while he waits his payment, the egg hatches and Slek finds himself face to face with a newborn - and very hungry - Gorn.