The Brotherhood of Thet 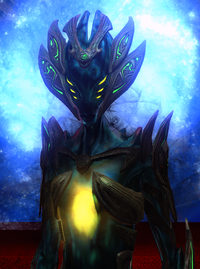 The Great God Thet - Actually an ancient and dying Iconian, stranded on Theta 122 for centuries.

The Brotherhood of Thet are an enigmatic group of religous fanatics living in an encampment close to the underground reservoir of water located on the planet Theta 122. A small and dangerous group, they were founded by Father Edward Morgan in 2397.

The Brotherhood is made up of members from species all across the Federation, from Humans and Andorians to Trills and Ktarians. Each member was once associated with Starfleet or some other organization, such as Atlas Base, and left that 'former life' to join the Brotherhood. At first glance, the Brotherhood appears to be a peaceful commune of sorts with each member playing a specific role in the upkeep of the camp and in their daily life. Secretly though, they are a dangerous zealous sect who actually committed murder to protect the water source from Ferengi drills-men. They killed the Ferengi away team sent from the FMS Kasseka and destroyed their shuttle to make it look like an accident.

Their primary goal seems to be to protect the reservoir and 'Sacred Caves' of the planet against intruders, and thus protecting the Gods they believe reside in the water. The Brotherhood is extremely territorial but will allow visitors to the camp if they believe they will respect their land and their beliefs.

In The Ultimatum (Arrow) it is revealed that the group are part of a plan by Morgan and the Iconian 'Thet' to use their natural life force as a means to power up the damaged Iconian Gateway which resides at the bottom of the reservoir.

Father Morgan, guilty over his involvement to offer the lives of his flock, decides to sacrifice himself. He overloads two phaser rifles and a complement of photon grenades as Thet's energy combines with him, and the resulting phased energy explosion powers the Gateway, allowing Thet to return home and the Brotherhood to be free.

With their leader dead, the remaining members of the Brotherhood of Thet are transported to the SCV Ascended Codex, ready to leave the system on the USS Arrow, or be transported to a neutral base by the Sheliak.

The Gods of Thet

Morgan believes there are 'Gods' living in the water source on the planet, and that they spoke to him and gave him visions of his mission. He in turn indoctrinated each member, showing them the water and the 'Gods' made them believers.

It is revealed in The Ultimatum that the creature the Brotherhood swears loyalty to is in fact an Iconian. Alone and wounded for tens of thousands of years, the Iconian known as Thet has been searching for a sustainable energy to repair his gateway and return home before he dies. Using mind control and the former Starfleet Officer Edward Morgan, Thet plans on using the cult flocks energy source by taking their lives.

After communing telepathically with Commander Collins and Counselor R'Ariel, Thet leaves Theta 122 once the Gateway is powered by Morgan's sacrifice. He thanks Starfleet for their help as he travels countless light years back home to Iconia, to finally die in peace.