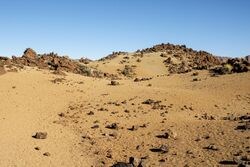 A Class L world, Theta 122 exists in a wide orbit around the Class-G star designated Theta Trianguli. Possessed of a delicate but thriving ecosystem, Theta 122 experienced a cataclysmic stellar event some one hundred thousand years ago, an event that the planet is only now beginning to recover from. Dotted by sparse areas of greenery and standing bodies of water amidst a mountainous, craggy surface, Theta 122 experiences a climate that a typical human would find chilly, and a typical Andorian might find sweltering. Active weather patterns enliven the planet’s atmosphere with substantial but avoidable static charge, which can be tricky to maneuver within if caught.

Upon it exists a small research colony designated Atlas Base. Notably outside Starfleet-protected space, it is home to an extreme group of scientists, each of whom willingly gave up the guarantee of support in exchange for the chance to pursue their work on Theta 122. The planet has long been suspected of containing unusual qualities within its core, and the scientists hoped to explore that suspicion to the fullest.

Unbeknownst to Starfleet, The Sheliak Corporate suspected an Iconian Gateway was present on the planet. They deliberately avoided the planet in their expansion, but instead kept a watchful eye on it from afar. Once the energy readings of the Gateway proved too great to ignore, the SCV Ascended Codex arrived in the system to investigate.

At the end of The Ultimatum (Arrow), Arrow receives word from Starbase 821 that a temporary truce has been signed by The United Federation of Planets and The Sheliak Corporate. With peace on the horizon, the Sheliak claim the planet.

Class L planets are small, typically 1 to 1/10 the mass of Earth, and are in their sun's habitable zone. Their atmospheres are closer to breathable, and water is usually present if hard to find.

Theta 122's north pole played host to one of Arrow's seasonally-inspired award ceremonies. The planet has a significant, if slightly unusual magnetosphere that lights up a particularly bright aurora. The north pole itself is in a valley below sea level, and surrounded by mountains on all sides, making it cold tolerable with warm weather gear but rather inaccessible without transporters or shuttles. The pole is quite snowy and icy, and lacks any vegetation.

Theta 122 is home to a large and peculiar underground network of caves, much of which is considered sacred by The Brotherhood of Thet. There are many openings across a notable portion of the surface, though they are frequently difficult to find. The caves seem to largely protect from the difficult environmental conditions that can occur on the surface. The cave network mostly connects to a vast central underground reservoir of water, the planet's only large, naturally occurring source of water. The Brotherhood believes a small antechamber connected to the reservoir is the home of The Gods of Thet, and zealously protects the water and this chamber in particular.

Theta 122 has been home to the Iconian known as 'Thet' for tens of thousands of years. His Gateway malfunctioned at some point in time, stranding and fatally injuring the Iconian. In all the time since he has been waiting for enough energy to re-power the Gateway to return home to Iconia. At some point in 2397 he encountered the former Starfleet officer Edward Morgan, and took control of his mind. His single purpose was to establish a group of followers who would sacrifice their life force to power the Gateway. Thus, The Brotherhood of Thet was formed.