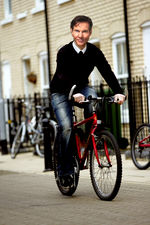 Maxwell exercising jauntily on the holodeck. 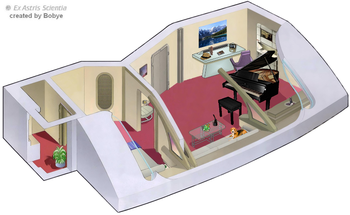 Previous quarters on the Constitution.

Maxwell's personal space is sparsely decorated, with a few exceptions. Most of his personal mementos are stored at his family home on Alpha III. He is fond of the mountainous region of his homeworld, and hangs one or two landscape images around his quarters.

The private areas of his quarters are usually slightly unkempt, though rarely dirty. The bedclothes frequently remain rumpled and one or two duty uniforms may lie crumpled in a corner.

Maxwell prefers to keep muted lighting in his quarters, around 50 percent illumination. Also, he always has music in the background, usually instrumental or soft genres. 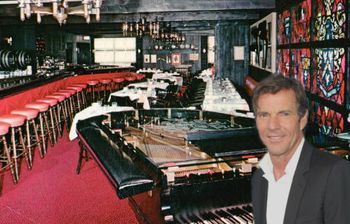 Cherished holodeck program, a recreation of a bar on Alpha III.

Personal - Holodeck. One program in particular, a meticulously detailed recreation of a bar from Alpha III, where Maxwell spent his formative years as a teenager and young adult. The recreation is complete enough to include copies of the original proprietors, as well as select regular patrons. It is a private holoprogram, normally only accessible by Maxwell himself. In 2392, the program was irretrievably damaged when the Darwin sustained massive computer core damage. While in the process of trying to source the original programming and rebuild the cherished locale, Maxwell received a copy of the program that had been archived by a friend.

Professional - Astrometrics lab. The majority of Maxwell's career has been spent conducting cartographic work in astrometrics labs of various sizes and layouts at a number of Starfleet installations. Though rarely the lead researcher, he was at times integral to ongoing studies and learned the value of teamwork and delegation during his tenures in such workspaces.

Maxwell mugging for the holoimager, as he is wont to do at any time, anywhere. 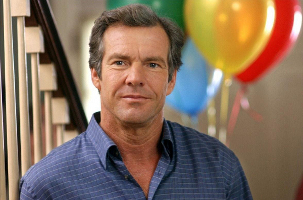 When asked to describe himself, Maxwell Traenor would dryly remark that he is a wholly unremarkable person, and happy to be considered so. He is a genial, easygoing person, quick to laugh and hard to anger. As a young adult, he had no particular ambitions, save a reasonable interest in stellar cartography. He was able to secure a position, first as a civilian contractor, then as an enlisted crewperson, in the Astrometrics department of a large outpost, Starbase 20. He plodded through the ranks, and across a couple large stations, until he found himself stuck in career limbo at Specialist, 3rd class, working on mundane charting tasks. He started to yearn for more, and managed to secure the recommendation of a bemused and sympathetic former commanding officer in order to enlist at Starfleet Academy.

Although he still prefers to remain out of the limelight, and has been chided for having a plodding, methodical nature, Traenor managed to maintain competent, if middling scores throughout his tenure at the Academy. Yet within him, he felt a spark of desire for personal growth and gain that had eluded him before. That spark drove him forward and pushed him to the edge of his comfort zone as he strove to better himself, and has managed to use the middle-aged renaissance to segue into a successful and driven career in Starfleet.

A colorful career in Starfleet ensued, with a rapid rise in ranks and a quick segue into Command. Maxwell faced strong trials and tribulations, and has since reverted back into his comfort zone as a scientist.