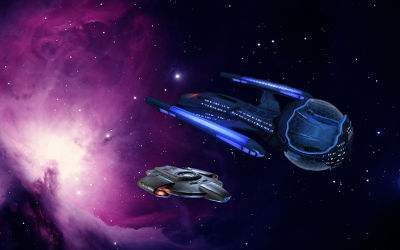 The USS Darwin-A and the USS Triumphant

In response to the theft of a Quantum Slipstream Drive, Captain Renos was placed at the head of Task Force Silver, and a chase lead the USS Darwin-A and her escort, the USS Triumphant captained by Captain Samal Frazier, into the Delta Quadrant. With danger, cat and mouse games, encounters with Delta Quadrant species and discoveries on a massive scale that left scientists and engineers alike in awe, the goal seemed simple enough - find out more about the mysterious enemy and get the QSD back. The two Federation ships and the thief they sought weren't the only ones operating in the region. Though successful in retrieving the stolen drive, an old adversary still got away, a new adversary was formed, and new friends were made. Based on the successes of the Darwin in this endeavor, a new mission mandate was formed for the versatile starship - venture back to the Delta Quadrant, establish a Federation presence, and erect a permanent outpost in the Pouiyeog region.

The USS Darwin-A was a Horizon-class starship and originally commissioned under the command of Captain Greir Reinard.

The USS Darwin-A was assigned to Deep Space 6 in the Zeta Gelis Region , a region full of undiscovered mysteries on the frontier of Federation space. A gold mine of scientific opportunity and the gateway to the unexplored regions of the Beta-Quadrant. With Starfleet bolstering its presence in the region to guard against the Zalkonian threat, the USS Darwin-A was deployed as a self-sufficient science ship with the ability to conduct in depth research and study without the need to return to starbase.

The unique design of the Horizon class offered plenty by way of advantages in this region; spatial anomalies, corrosive gases and other such discoveries can be examined safely. Volatile sections of salvaged debris can be transported without risk of harm. The scientific possibilities are endless...

But the volatile political nature of the region itself has also not been lost on Starfleet. The Horizon class is built to last and, while it does not harbor offensive capabilities to equal one of Starfleet's escorts or cruisers, it is resilient by design. A perfect match for an unpredictable region where surprise lurks behind every star system.

Eventually the political climate in the region stabilized and the Zalkonian were no longer a threat. The USS Darwin-A was decommissioned on 239107.14.

In response to the crisis at Prometheus Station, the USS Darwin-A was recommissioned in the Zeta Gelis region under the command of Commander Renos. While Starfleet had been looking to establish a stronger presence in the area — a region ripe with potential for scientific discovery and exploration — for some time, a distress call from a Starfleet survey vessel being pulled into an unidentified phenomenon prompted the emergency response. With fears that the phenomenon was the latest complication of the Prometheus Incident and the role of the mysterious Zalkonians still unknown, Starfleet tasked Commander Renos to assemble a team of officers from across the fleet.