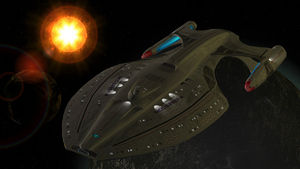 The Apollo Space Program was a vision come to life when the Apollo 11 crew landed on the surface of Earth’s moon on the 20th July 1969. The original Apollo program ran from 1961 to 1972. For decades, it stood alone as the single greatest achievement in deep space exploration. On the heels of the program, mankind was tested to push themselves harder, and further into space.

The USS Apollo was a fitting name for the Achilles class ship, which launched on 238902.03 with a mandate of peace and exploration in the far reaches of the Beta Quadrant, near the Typhon Sector. Like those that had gone before them, the ship's crew would face the unknown and boldly go where no one has gone before. It faced its toughest challenge and was lost on stardate 239104.19, in a battle against two Borg Cubes. It had undertaken a classified mission with the goal of preventing a potentially dangerous substance from falling in Borg hands.

The dream of yesterday is the hope of today and the reality of tomorrow.

In the ashes of the incident, the crew was eventually reassigned to the next iteration of the namesake. The Odyssey class, USS Apollo-A launched from Utopia Planitia on stardate 239109.04. The ship was the newest and largest ever constructed by Starfleet. With its enormous size, came a responsibility of the same size. Picking up where the original USS Apollo left off, the successor departed for the Typhon Sector with Rear Admiral Andrus Jaxx in command. It was taken out of service temporarily on Stardate 239205.28 as part of a "Strategic Reconfiguration". It was put back into service under Fleet Captain Kalianna Nicholotti's command on Stardate 239207.13. Now better equipped, it resumed its former mission until recalled on stardate 239302.16. Using its slipstream drive, they would extend Federation relations to systems unknown, acting as ambassadors of peace, as they charted more of the universe.

There can be no thought of finishing, for aiming at the stars, both literally and figuratively is the work of generations, but no matter how much progress one makes there is always the thrill of just beginning.

Following the return of the Intrepid class, USS Voyager from the Delta Quadrant, Starfleet initiated Project Full Circle. In 2381 the first ships set off for the Delta Quadrant. Following their success, Starfleet decided to follow up with a second wave of ships, which included the Horizon class, USS Darwin-A and Defiant class, USS Triumphant, in an attempt to extend Federation relations into the quadrant. This led to the creation of Outpost Unity, which was build in a joint collaboration between Starfleet and the Talaxians. The Triumphant was reassigned to other duties in the Beta Quadrant, while the Darwin and its commanding officer headed up a new Task Force in the Par'tha Expanse.

Starfleet Command is now ready to initiate the next phase of Project Full Circle. After years spent exploring and charting the Thyphon Expanse, the USS Apollo-A was reassigned to the new frontier, and on On Stardate 239509.25, it launched with a new commanding officer and crew. Rear Admiral Renos, who has considerable experience in frontier space and commanded the Darwin-A during its mission in the Delta Quadrant, was deemed the ideal candidate to lead the new mission. Their primary mission will be to explore strange new worlds, seek out new civilisations and boldly go where no one has gone before.

Our prime obligation to ourselves is to make the unknown known.