Commander Emery Rhyn, a joined Trill, is currently Chief Tactical Officer on the USS Blackwell, as of stardate 239410.11.

Emery is a "by-the-book" type of Starfleet officer, and prefers to follow established Starfleet protocols whenever possible. 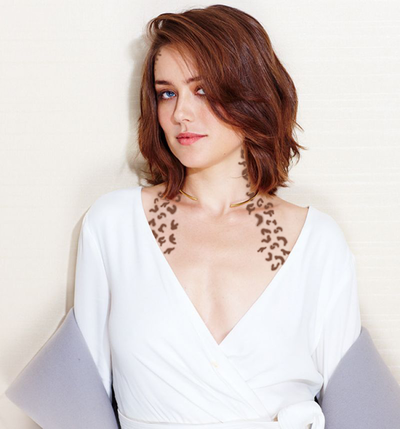 Emery in an evening dress

Emery first met Doctor Isabel Pond upon arriving on the USS Darwin-A in 239306, when she reported to Sickbay for her transfer exam. It was only through casual small-talk between fellow Trills that the extraordinary realization came about that one of Rhyn's previous hosts, Kilanda, was actually Dr. Pond's great-grandmother. Both Emery and Isabel know that they are not actually genetically related, but the pre-established connection has started a friendship, with a fairly odd dynamic to it.

Emery first met Kael Wilmer when the young lady was a Starfleet cadet who arrived on the USS Darwin-A with her father, Lt.Cmdr. Nate Wilmer. Emery immediately took a liking to Kael, even as she took a romantic interest in Kael's father. The two women have decided to remain friends regardless of what happens between Emery and Nate.

Emery first met LtCmdr Nate Wilmer when he first was transferred to the Darwin in 239307. Emery found Nate very interesting, and although their relationship had not progressed beyond a couple of dates, as they were still in the "get to know you" phase, Emery had high hopes that this could possibly turn into something more. Unfortunately, their relationship was put on hold indefinitely when Nate was transferred off the Darwin. His return to the USS Blackwell with his fiancee Charlotte Farnsworth has pretty much signalled the end for Emery and Nate.