The USS Paladin is the fourth Prometheus class to be built by Starfleet, and its placement at Starbase 118 on stardate 237902.18 was something of a battle between a number of Admirals requesting the ship. Nonetheless, due to the Starbase's placement in a historically volatile zone, she was awarded the ship. It was originally designated to the experienced, but relatively young, Commander Rachel Daninburg. Under the strict and careful supervision of Admiral Luke Reider, her first cruise was eventful.

After Paladin's maiden voyage, her commanding officer was promoted to the rank of Captain. Years later, when Daninburg stepped down due to personal reasons, her Executive Officer, Commander Varaan, stepped into the position. Soon after, the Paladin was recalled to spacedock for experimental upgrades to be tested by a different crew, while the Paladin crew was reassigned to the USS Atlantis. 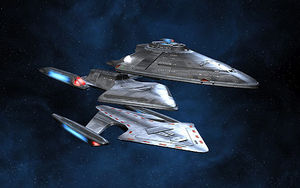 After the first major encounter between the Dominion and the Federation at the end of 2370 Starfleet responded to the new threat by reactivating the Defiant project and continuing development of the Sovereign project. However, it was felt that further action was needed; the Sovereign class ships were relatively resource intensive, and while the Defiants were easy to build they were also rather limited on range and endurance. After much testing and design, various elements of both ships were combined. Ablative armour, quantum torpedo launchers, advanced hull geometry, the warp field technology of the Sovereign and Intrepid classes, and finally the separation concept of the hull were all incorporated.

The Prometheus class Heavy Cruiser is capable of separating into three sections - the upper and lower engineering hulls and the saucer section. Both parts of the engineering hull had two nacelles whilst the saucer section had a small auxiliary unit which would deploy once separated. The development and construction of the prototype vessel took three years, and the USS Prometheus was launched in April of 2374. Initial trials went well, but during the shakedown cruise the Prometheus was stolen by Romulan operatives intent on handing the ship over to the Tal Shiar. The power of the Prometheus was graphically demonstrated during the incident. Although the prototype was still in the test phase, she was able to inflict devastating damage on a Nebula class ship and withstand a combined attack by two Defiant class Escort vessels and an Akira class Cruiser. In the same battle she used multi-vector assault mode to destroy a Romulan Warbird with ease. The ship was eventually recovered with the assistance of two EMH units on board, and after some assessment of the project's security procedures the testing resumed.