James sometimes writes this address as Deck Φ0 (Magnetic flux quantum constant) , Apartment σ (Stefan-Boltzmann Constant), With the appropriate bounds. It is a standard sized apartment-style house with three rooms all slightly darker than most, like most Vulcans prefer; however it is kept to usual Earth temperatures.

Most of the time music suiting James' eclectic tastes can be heard playing in the background. Of course, out of the interests of politeness this is usually paused when he has guests. 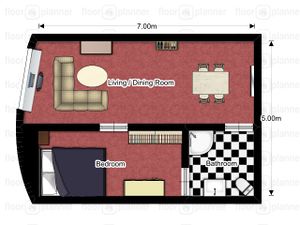 Note: Due to the limits of 21st century floor planning technology, placeholders are used in the stead of 24th century objects. Please click on the image for an interactive version.

This is an open plan Living room / Dining room. Facing the room's door is a L-shaped sofa with a oval, glass, coffee table in the gap the L creates. In front of that (to the left of the door) is a tall, thin cabinet. Behind this sofa is the door to James' Bedroom. To the left is the rooms window (giving an excellent view of Lambda Hydrae and any ships docking from that direction.) with a large workbench underneath, following the width of the window. Directly opposite, on the other side of the room, lies the replicator and in front of that a small, rectangular dining table. Also on this side, by the door, is a small shoe rack. Behind the dining table, but flush with the wall housing the replicator, is the door to the Bathroom. Several picture frames hang on the walls.

James tends to keep this table as free from clutter as he can. Generally, the only object on it will be his Desktop Viewer, which he has connected to both the Starbase's and (when docked) the USS Victory's Library Databases.

In the middle of the bench a small seat it tucked underneath it, with draws on either side. The left hand has the most draws containing various components that are either unreplicatable, or common enough that James deemed it easier to mass replicate them. The draw on the right, takes up the entire height of the table and contains boxes with James' various projects. On the top of the table is usually whatever project James is currently working on, a toolbox and various specialist tools - such as a soldering iron and lead-based solder dispenser for use on projects involving 20th century electronics.

Unlike the book case in his bedroom, this one is mostly used for display. On the top shelf (which is also the tallest) lies a vase of flowers. Under that, is a photo his parents in one frame in the middle and then frames with pictures of his grandparents either side. Underneath is a frame with James' Stafleet Academy Diploma on the left and the graduating year photo on the right. The penultimate shelf contains a framed photo of James, Telice and Kieran from their horse riding trip on Sigma Iotia. The last shelf is empty. The rest of the space is taken up with a cupboard where James stores his Thermin when not in use.

Like many pedantic people, James has set several personal choices on his home replicator. For starters, instead of having to specify Tea, [variety], Hot, James has set his replicator to assume that he wants all beverages in the Tea category as Hot (with Hot being specified as 318.45 Kelvin - of course whether it is actually delivered at this temperature is a different story.), correcting one of James biggest pet peeves with the system. Additionally, he has set the system up to deliver a set of pre-set menus for each day and meal, when requested. It is also set up to deliver a random menu (of the appropriate time) when asked, although once again whether it gets the right meal time is a different story.

James tends to have different tableware depending on the replicate food items heritage. For instance, while Earl Grey tea is served in a China Tea Cup, Vulcan Spice Tea is served in a Vulcan monek. This part, at least, seems to work without hitch.

James bedroom is comparatively cramped, due to James swapping out the standard issue bed for a Queen sized bed, as he finds anything shorter uncomfortable due to his height. This is placed flush against the south and west walls. A small bed table takes up the gap between the bed and the north wall. Opposite to the bed is the door to the bathroom. Above the door is a bookcase and underneath a closet. As opposed to picture frames, James has chosen to hang posters in this room.

The table acts as an induction charger for James' PADD, so it is usually placed here. James will also have whatever the book he is reading here (if it is a paper copy rather than just being read off the PADD).

James has divided his bookcase into three sections:

This section takes up the top three shelves. Notable titles from this section are 'The Hitchhikers Guide to the Galaxy' by Douglas Adams, 'Brave New World' by Aldous Huxley and "The Complete Dixon Hill, Private Detective Collection".

This section takes up the top next two shelves. Its contents is mostly devoted to old History books on pre-21st century Earth, Mostly concerning the industrial revolution and the 20th century. There is also a paperback copy of the teachings of Surak (replicated from Vulcan cultural archives).

This section takes up the bottom shelf. It contains engineering documents that are of interest to James, from the position of his profession, that he either can't - or is unwilling - to get in a digital form. For example, various bound copies of schematics for things ranging from the first (successful) warp drive (a modern reproduction of Zefram Cochrane's notes) to the modern EPS conduit. There are also reproductions of important scientific papers from both Earth and Vulcan's past.

James ensures that his closet is stocked with at least one weeks worth of fresh Uniforms, two different kinds of casual clothing (for different situations) and one set of Dress Uniform. The clothes he wore to Sigma Iotia are also hanging up, partially due to sentimentality and partially due to the fact that they have already come in handy more than once.

The walls of James bedroom contain the posters that used to decorate James' previous quarters. Above his bed is the full album art for Pink Floyd's 'Dark Side of the Moon' and an advert for the Atari 1040 ST. On the door are posters for Blondie and Jeff Wayne's Musical Version of The War of The Worlds.

A standard wash room equipped with a sink, sonic shower and toilet.