From 118Wiki
< James
Jump to navigation Jump to search

James was born in the city of Shi'Kahr, Vulcan on the 30th of April 2369. His Father is a Physicist named S'bok, who is half-Vulcan and his mother is a Terran computer programmer called Kaname Nakamura. He was named after his great-grandfather Admiral Nakamura (not Starfleet).

His childhood was mostly spent studying. Even from a young child he wanted nothing more than to succeed academically, and that he did.

James was also very serious as a child, often making the concious choice to study for the future over enjoying the present.

Like most Vulcans, contrary to popular opinion, James enjoyed a very warm family life. His Father spent large periods of time away from home, due to his research, but when he was home James enjoyed his company greatly, learning much from him. His Mother, on the other hand, was able to work from home. It is from her that James got his great love of computers.

Of course, sometimes his Mother would be called to work. During this time he would either stay with his Grandfather on Vulcan if it was during school time, or go stay with his maternal grandparents on Earth. It was during one of these visits that he first met Telice.

Around this time there was great debate over the Re-unification of Vulcan and Romulans. Both of James' parents supported this move, however they where not active in their approval. Because of this, and his understanding of the benefits of a different point of view, James came to support the unification.

It was later reviled (See Here for the full SIM) that during one of his visits his to Grandmother on Earth in 237602.19 he met the young Telice Shagan during an event that caused (or at least amplified) her prejudice against Vulcan's when a (now disgraced) Vulcan Ambassador by the name of T'Rok took offence to a remark and caused a scene. Through this and several remarks on the matter made by James, Telice lowered some of her hostility towards Vulcans and the two became friends.

During his school-time James was mercilessly teased by his fellow students due to his 'impure' heritage. Regularly he was told that "I have noted many resemblances between your Mother and an Earth rodent of the subfamily Cricetinae, while my nose, which is ten times stronger than that of a human, could not fail to detect around your Father a powerful odor of plants in the genus Sambucus." and that "You are so deficient in intellect, that when instructed to bring back a fruit-filled baked pastry, you search for a rational sum for the ratio of the circumference of a circular area to that of a straight segment that passes through the center of the circle and whose endpoints are on the circumference.".

Outside of school, James developed his current interests. Give greater freedom with the replicator, James began to replicate old computer parts and from these re-make various early models. This behaviour was encouraged by his Mother, a computer buff herself, who regularly taught him ancient programming languages like Lisp and C, so he could make his own applications for them. He also started to enjoy Music, at first listening to more traditional Vulcan music but after exposure to his last hobby, he drifted towards late 20th century music like Pink Floyd, ABBA and Queen. Lastly, after a history lesson in his 2nd year of school about 20th century Earth, James began to read up on a lot of history from that time, becoming somewhat of a 20th Century Earth buff. 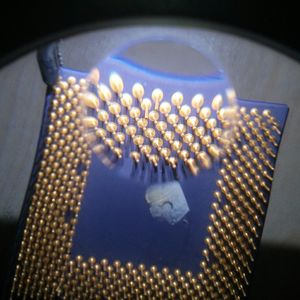 James' first solo project - a functional replica of a 20th century 'processor'. Despite its limitations compared to isolinier circuitry, James was intrigued by it.

It was also during this time that James began to shift his pattern of his parents absence. After James' 13th birthday, he would generally stay at home by himself during this time, owing to his Grandfather's passing. At first neither parent was happy with this, however after the promise of one of his Father's colleges that lived nearby to check on him they where appeased. He also gradually began to spend less time on Earth, choosing instead to go with his Mother.

James very much picked his interests when he joined Starfleet. He picked Engineering as his major, with as many options as he could relating to Computer Science. He also decided that it would be logical to take Com/Ops as a minor, in order to better understand the systems he would some day have to repair.

James also kept himself very much to himself in the Academy - he went there to study not party. The only real relationship of note he had was with Ezri Otner, a unjoined trill and James' roomate. Even then, that went little further than that of a Co-worker, with James occasionally helping her with some of the subjects she found tricky. From this however, he learned a great deal about Trill society, namely how important their Symbionts are.