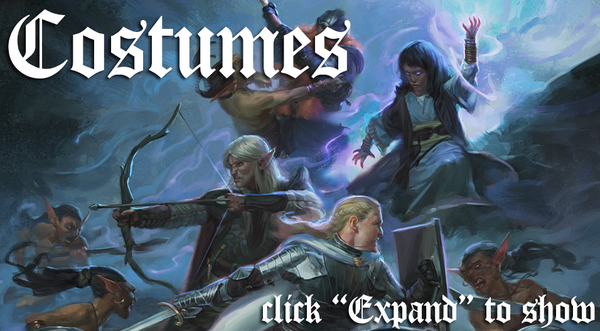 Every Senior Officer has randomly assigned a costume that changed their attire and in some cases even their appearance. To give everyone an overview of these changes without having to dig through sims, we list the costumes here. Please remember that some of the characters might not be recognizable on first or even second glance. Have some fun with it!

Race: Drow
Class: Warrior/King
Notes:Gender changed to male
Descriptions: Her arm was clad in intricately decorated metal, a little darker than silver or aluminum. Following upwards and then down her body she realized she was wearing a full body armor. From the feeling it was not put on her skin but instead over a part leather part linen outfit. Blinking, she noticed bright white hair on her chest in a braid and pulling on it she surprisingly realized it was attached to her face. That was when her gaze fell on her hand, peeking out of the armor. It was black with a purplish shimmer in the light. .oO Well that's new. Oo. A moment later she felt a weight on her head and reaching up she felt the shape, but couldn't place it. So she pulled it from her head, a few long strands of white hair getting caught in it. She laughed when she recognized the item as a royal crown, Shiny metal clad with gems, and in the 'dome' filled with a purple velvet piece of fabric. That for sure was not the crown of a princess or a queen. It was too masculine.
And there stood Jalana, in a full body armor, in an intricate style and slightly decorative -with a slight tilt to the right caused by the sword hanging from her hip- with a kind of purple velvet cape hanging from her backside brushing over the floor, the crown on her snowy head with hair flowing over her shoulders down to her hips pointed ears poking out from beneath it slightly, joined by a snow white finely braided beard ending mid chest. Her red eyes slightly squinted under the hand-brella protecting them from the light.
Links to Pictures: Armor without hood or mask, Race look, plus red eyes and white braided beard down to mid-chest

Race: Elf
Class: Queen
Notes:Gender changed to female
Descriptions: The Vulcan wasn’t familiar with the genre of the holoprogram, but the robe that it applied to him, if somewhat flimsy and tight about the torso, was at least not too different from things he usually wore of his own choice.
The Vulcan went to tilt his head in acknowledgement, and felt something start to slide on his hair. Untucking his hands he reached up and lifted down an odd item of sculpted silvery metal, adorned with a considerable number of what appeared to be gemstones. It was decidedly... sparkly.
Although when the breeze blew a pile of his own now long and currently blonde hair in his face he considered having a word to Choi about increasing the practicality requirement in future.
Links to Pictures: Dress, Tiara, Cillian Murphy in curls

Race: Aasimar
Class: Artificer
Descriptions: The first thing she noticed from the program clothing her was the hefty goggles that now rested atop her head, covering her antennae and held in place by several tight leather straps. Bit awkward, that. Her clothing was cloth and brown leather, dark gloves covered her hands. Various contraptions made of metal and what looked to be glowing stone hung from her waist. A dagger of some sort was sheathed at her side.
Links to Pictures: Outfit

Race: DND Tiefling
Class: Rogue... Assassin? Maybe
Descriptions: As she stepped through, she looked down at her throwing and was amused as, based on her arms and wrists, her skin took on a decidedly deep purplish tint.
She looked over the rest of her body and noted that she was now clothed in black leggings with a bodice that to Rue, seemed designed to make the most out of her breasts, which were now the same purplish tint as her limbs. She noted that the front of the bodice was interlaced with some detailed lace and designs. Under the Bodice was a light white shirt that seemed more form than function. Around her waist was a belt of various pouches and a sheathed short sword. She checked the pouches and found lock picks, herbs, and assortment of other oddities.
Her normal face was a one that was similar to her own, save her eyes were now jet black sclera with red irises. Her hair was white and long and two delicately curved horns extended from her forehead. She blinked and nearly cackled, and then realized she had a curious weight on her back side, and twisted to see she had a thin tail.<r> Links to Pictures:

Race: Halfling
Class: Cleric
Descriptions: T'Seva stepped into the holodeck...and promptly found herself looking up at everyone. An illusion, of course, so she would seem to be shorter. Huh. She was also wearing black robes and had some kind of wooden symbol around her neck. Of a mushroom.
She had to be less than four feet tall right now!
Links to Pictures:

Race:
Class: Ranger
Descriptions: As she went to step forward her attire changed from her cargo trousers to a green skirt with long brown boots and grey legging. Her t-shirt was replaced by a chest plate and her hair was now in a neat plait. She felt straps tying something to her back. She reach over her shoulder and pulled out an arrow, then she noticed the bow slung over her other shoulder. She had no clue how to use the thing. She also noticed a dagger, she’d feel more comfortable using that but this was meant to be a party not a training simulation.
Links to Pictures: Picture

Race:
Class:
Descriptions: The first thing he noticed was...well, he was suddenly clad in skin-tight metal, metal that slammed tight around several very private parts of his body. To call it invasive was an understatement. The second was his heels suddenly rising off the ground. He stumbled forward with a curse, grabbing wildly at the closest thing - which turned out to be a stall's post. A staff, topped with a white and gold banner and a white jewel, fell to the cobblestones nearby with a loud clang.
Golden metal high-heeled boots rose to his mid-thigh, and leaving the rest of his thighs and up to his hips completely bare. A metal bodysuit covered some of his torso, but hardly all of it; it stopped midway up his pectorals. It was molded over his body as if it’d been painted on, which meant it showed far more of him than he wanted it to, clinging to private bits that didn’t need to be encased in metal or shown off. The only saving grace was a gold and white cloak that’d appeared over him, though some damned fool had apparently cut half of it off.
Links to Pictures: Armor

Race: Dwarf
Class: Warrior
Descriptions:He cursed Ji Hoi in his mind as he “felt” himself shrink, but then the unthinkable began. Slowly the horrid feeling he had cleansed himself of years before started to come back. First on his beautiful scalp, then shortly his face began too. The feeling was so oppressive he immediately began to claw and scratch at himself.
Sindri gave himself a quick once over. The outfit was definitely protective enough, but the facial hair was driving him insane. He picked up his axe and ran his thumb over the edge. The holographic environment adapted to his reshaping pretty nicely he thought looking at his reshaped features thanks to the sharp axe. No respectable person wore that much hair.
Links to Pictures: Picture before, Picture after shave

Race: Human
Class: Paladin
Descriptions: He was a paladin once again, a blade on his hip and a shield on his back, the golden-tinted plate mail bulky and awkward on his slim body.
Links to Pictures:

Race: Orc
Class:
Descriptions: He was growing taller. His muscles became more pronounced. His hair changed from his neatly cropped style to a mohawk with a braid. A pointy beard sprouted on his face. And his skin changed to a greenish color. His clothes were different too. Suddenly he was wearing armor, holding a shield in one hand and a long sword in another. He had turned into some kind of orc.
Jacob flashed his best orc smile but based on the reaction he could tell it wasn't the same as his regular one. This one was more bared teeth and saliva than his usual warmth and compassion.
Links to Pictures: Inspiration

Race: Elf
Class: Mage
Descriptions: There was a shimmering haze and he stretched to find his thin blue form encased in flowing black and purple robes lined with gold and decorated with polished claws and ornate arcane markings. He had an amulet around his neck, a staff in one hand and some very impressive shoulderpads.
His voice sounded deeper than usual. His hair, while still wispy and white was longer and his skin took on a grey tone that overlayed the blue. Oh and the ears. He had a marvelous set of elvish ears. Funny enough the program had decided to keep his antennae and simply work the illusion of a headpiece around them.
Links to Pictures: Reference pic

Race: Unspecified
Class: Paladin/Knight on horseback
Notes: Affixed to horse via brace and support a la Bran Stark. Some genius has given her access to a sword.
Descriptions:She quirked an eyebrow down at the large animal which had replaced her wheelchair, the modified saddle and brace keeping her secured on its back. Had this been specifically designed for her by Ji-hu, or was it merely an accessibility feature? Either way, it was quite an accomplishment. As was her costume. T'Reshik lifted an arm experimentally, finding the plate armour to be far lighter and more movable than expected. The gentle scrape of metal and the shifting of some weight alerted her to the presence of an object strapped to her back, and after a bit of groping and some rather clumsy unsheathing, the Vulcan found herself in possession of a long and impressive sword.
Links to Pictures: Armour

Race: Human
Class: Archer
Notes:
Descriptions:Raven looked down at his feet stupidly, confused at what he was seeing. His Starleet uniform had been replaced by what could only be decribed as an old fantasy style peasants tunic, buckles belts and all. oO I look like fraking Robin Hood? So much for first impressions Oo
Links to Pictures:

Race: Elf
Class:
Descriptions:Everyone seemed just a bit shorter though. Sol paused confused, now noticing the transformation that had taken place. She looked down at what she was now wearing. Her attire consisted of a ornate yet short kimono with long draping sleeves and a corset shaping her waist On her right shoulder was a pointed pauldron and armor that covered her upper arm. The parts of her legs that werent covered by the bottom of the kimono were covered in a pair of tights. Her left shin was covered in armor similar to that on her arm. On her feet were single toothed geta about 4 inches high, which she was surprised she was maintaining her balance on. An ornate sash kept 2 gently curving swords secured around her waist, the longer one able to be used by her dominant hand, and a shorter one for her off hand.
Her still white hair was done up in a bun, held with just a pair of ornate sticks. Her eyes were still red, though now more so, and framed with heavily pointed eyebrows. A pair of pointed ears stuck out from the sides of her head.
Links to Pictures: Outfit, How she looks

The Roc That Laid the Golden Egg

Crossing Swords With the Mad Queen