Teryn Vehk is a Cardassian currently serving as a strategic operations officer on Starbase 118 Ops. Teryn specializes in fleet strategy and and tactical analysis.

Teryn is an extremely serious person, almost pathologically so. He holds himself to a nearly impossible standard of performance and professionalism - and holds others to the same high standards he holds himself, which means he is oft disappointed. On the whole, however, he might have excelled in Diplomacy. His manner is generally reserved and polite, and most recognize him as being of noble birth for his careful decorum and inbuilt sense of superiority. He makes a very conscious effort to be in control of himself at all times, and his physical manner has an odd intensity to it, a feeling of energy crackling just under his stern exterior. Teryn is usually seen as aloof and withdrawn, though the reality is that he sees overt displays of emotion as a weakness that others could exploit.

He has a somewhat justified fear of being manipulated, and tends to be suspicious of others who seem too fond of him. If there was anything he failed to master, it was acting - any emotional outbursts are dreadfully honest, and his typical response to anything he finds uncomfortable or embarrassing is to freeze up and then pretend it didn’t happen. He tends to be competitive, if only because being beaten means he’s failed the standards he sets for himself.

Teryn is quick to take command of situations - too quick, one might say, as he tends to assume by default that he should be in charge and be heeded. Teryn is not arrogant in the classical sense, however - to him, the fact he is better and should be seen as such is simply a fact of the universe, and his skillset is something anyone could gain if they simply put in the time and effort. He tends to automatically take charge when leadership is needed.

Despite his Cardassian heritage and his proud bloodline, Teryn is quite short, standing at 5’7 and so far having not grown another inch, much to his annoyance. He takes incredibly good care of his appearance, however, dressing carefully and carrying himself in such a way few realize he’s a bit short. Thankfully, heels for men are currently fashionable, and he often wears them. 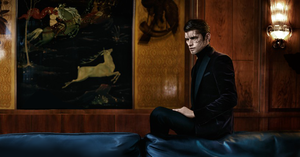 Teryn out of uniform.

Like most Cardassians Teryn has dark hair and off-grey skin. His forehead spoon is a bit slimmer and more delicate in appearance than is average for males. His eyes are his most notable feature, as they’re bright yellow and at times contrast his darker skin considerably. Like his father and uncle, he is able to grow facial hair, but carefully shaves it away. He has high cheekbones and dimpled cheeks leading to a small mouth with full lips - which are usually pressed together either in thought or concentration.

Teryn's voice is usually curt and carefully enunciated; he speaks with great care, his choice of words very formal. In moments of shock he slips into an odd sort of accent, a mix of Earth's German dialect and syllable pronunciations more common in the Cardassian language.

He takes incredible care of his appearance; never will you see a hair out of place, a uniform unpressed, a shirt wrinkled. When out of uniform he dresses rather fashionably, his clothes always somewhat formal. He prefers layered suits, long coats, and shiny leather boots in darker colors. His blazers are often rich velvet or made of hand-embroidered brocade, his ties and handkerchiefs of silk, his buttons and metallic accents made of true gold, silver, and jewels. Not a single piece of his wardrobe didn't originate from the galaxy's top brands, and much of it is handmade and hand tailored. Like his uncle, his favorite brands tend to be Earth-based companies.

Born the son of a Gul, Teryn’s family is an old bloodline on Cardassia and a well-established member of the Trelek noble class, with his family tree - as he is oft to both reflect upon and comment - containing many notable military and government officials, going as far back as recorded history. Teryn was born on Cardassia Prime in 2370, and his early childhood is, as far as he’s concerned, idyllic; he saw his father often, was raised in luxury, and began his education with a key social advantage. He remembers little of the dwindling resources or the concerns of the adults as the war turned against them - in fact, he remembers none of it directly.

All that changed in 2375, of course, when his world and childhood effectively ended. The bombardment of the Dominion and their overwhelming attack obliterated his first home and wiped out most of his close relatives, leaving only his mother and paternal grandmother where once there had been older cousins, servants, and bureaucrats. He awoke in the wreckage of the day room, saved only by being in a corner; all his cousins and their attendants died at his feet. He remembers a flash of light and overwhelming silence.

As the bombardment commenced, his father was murdered by the Dominion officers aboard his ship, never getting the chance to fight back. It’s a loss that’s defined much of Teryn’s life since.

His grandmother chose to take he and his mother to their remaining relatives - the household of his uncle, Trevok, at the time one of Cardassia’s ambassadors to the Federation. They traveled to Earth, and Teryn has never since returned to Cardassia and instead grew up just outside of Munich, Germany.

Teryn’s childhood after that was, all things considered, incredibly privileged. His uncle - considered a bit eccentric - took quickly to the boy and they grew very close, Trevok effectively becoming a new father. Trevok had made himself many friends on Earth and grown rich with his clever investing, and he used his money to gather art, and emulate a noble’s lifestyle.

The restored Schloss Nymphenburg and its parklands.

Before his family arrived, Trevok had purchased the then-decaying ruins of the Schloss Nymphenburg, a German palace damaged heavily during the Eugenics and World Wars. In the centuries after, its vast parkland had been returned to nature, but under Trevok's ownership, much of the palace and original fixtures have been returned, rebuilt, and restored. Teryn thus grew up in a home of almost unthinkable luxury, but also a very public place; the palace is open to tourists, hosts grand parties, and full of people. As a small child he learned quickly to respect material things from a distance - especially after shattering two mirrors.

But this new life came with plenty of tensions. Aside from the obvious ones encountered by a Cardassian child on Earth, his family continued his Cardassian education - his uncle adding other subjects to it - and it meant that compared to others his age, Teryn was never away from schoolwork. He had no choice but to excel at every skill he was told to learn, no matter if others might consider them unnecessary - languages, history, literature, tactics, strategy, music, shooting, swordplay, even horseback riding and other things most would consider hobbies were treated as a part of the curriculum.

The household was hardly ideal, as well - Trevok was unmarried and began to resent his mother’s insistence he become otherwise. Teryn’s mother Midia was from the lower Ti’alek class, a stranger to the nobility and one considered largely unwelcome by her husband’s family. There was constant conflict between his mother and grandmother, and things only got worse when Trevok agreed to marry - yet, once his wife Laluia had moved in, Trevok turned and began an affair with Midia, the two swearing Teryn to utter secrecy on the matter.

His uncle, grandmother and mother all struggled to be the one in charge of Teryn, which only made things worse. His new aunt Laluia soon joined the fight on his grandmother’s side, and in the end the only thing it convinced Teryn of was that he was never, ever going to let himself get married.

When his education ended at the age of 17, the expectation had been that he would return to Cardassia to begin his service to the military there. His uncle had, he decided, a better idea - and he pushed Teryn to apply to Starfleet Academy instead, seeking the permission of the Orders. It was a political ploy, of course. Teryn had few illusions that such a gesture would have been anything but, but he obeyed his uncle and family, and the application was finally accepted a year later in 2387.

In the Academy, Teryn excelled at his courses, pushing himself to be perfect in his records. It took a toll on his health - too many long nights, too much exertion, too little proper food and drink. He struggled in the Academy's culture, focusing entirely on his coursework and struggling with social interactions. He was deemed outright dull by his classmates, with a family too quick to visit and glare at people.

He's only recently been assigned and it remains to be seen what he will turn into now that he's on his own and in a world beyond tests and simulations.

After serving for several months aboard the USS Constitution-B, Teryn is on temporary assignment with Starbase 118 Ops, assigned to assist with anti-terrorist tactical strategy.