Dave 'Raven' Young is currently serving as the Chief Science Officer aboard the USS Constitution-B. 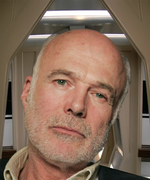 Born in 2372 at Utopia Planitia on Mars.

From a young age, most friends and family have called him 'Raven' because of his jet black hair.

Raven finds occasionally finds it awkward meeting and interacting with new people. Raven can sometimes respond inappropriately in a sarcastic manner, particularly if he is feeling threatened or intimidated. He has a tendency to speak quickly and rambles on a little when he is nervous.

An avid explorer, Raven has always shown a keen interest in the sciences, particularly new stellar phenomenon and exotic particles. His specialty is Stellar Cartography, sensors and scanners.

Young has a strong dislike of weapons and violent encounters. He would rather be armed with a tricorder in most situations.

Dave Young joined the academy in 2390 shortly after his mother and father separated. When Young decided to leave to join starfleet, this strained the relationship with his father who had felt abandoned by them both. Young felt that his father was being selfish and could not expect his son to live in the Martian 'Dust Bowl' forever.

He came within the top ten for his science classes, was fairly average in the others. He did however enjoy a placement in an engineering simulator.

Raven is rarely seen without his Klingon inspired Bracer which encloses a concealed modified Tricorder and PADD. He had created the Bracer to give him an edge in an infiltration mission aboard the USS Geneva. It was instrumental in obtaining a conviction of Lieutenant Commander Katrina Tam after she betrayed Starfleet, committing treason and endangering many innocent lives.

On joining the crew of the Constitution, Raven was caught up in a malfunctioning Holodeck program with many of the senior staff. Although he and his colleagues escaped with no permanent injuries, Raven has some reservations about stepping back in a Holodeck again. He wouldn't admit it but he has been showing some mistrust towards Holograms ever since.

On his first major mission he was surgically altered to appear Klingon along with a number of his crew mates as part of an undercover mission.

On this mission, Raven was forced to kill an enemy Klingon pirate with a Disruptor after witnessing a team member being wounded. Although Raven knew it was a do or die situation, he has always been a pacifist and felt incredibly guilty for what he had to do.

After the Geneva mission which was subsequently redacted and classified by Starfleet, Raven was promoted to Lieutenant Junior Grade. He also became the Assistant Chief Science Officer aboard the USS Constitution-B.

The crew of the USS Constitution-B was sent on a rescue mission into the Lembatta Cluster, a large Nebula and Stellar Nursery nearby Starbase 104. Here, the ship was attacked by a large jellyfish like space creature. Once the creature received it's newborn child that had been taken by the Linarans, they managed to safely get back home to the Starbase with minor casualties. Afterwards, Raven liaised with the Linaran Science Ministry and the Starfleet Academy of Science to promote peaceful co-existence with the energy beings of the Cluster after he found a way of tracking their energy signatures