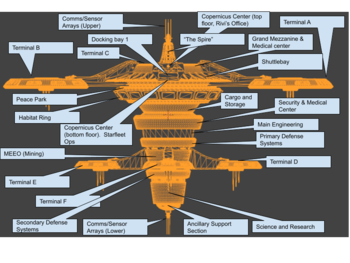 Getting around Amity Outpost

Amity Outpost is the Federation's floating city in the Delta Quadrant, a space station that includes a train system and terminals for visiting vessels. The primary method for people to get around the small city is via the "Corkscrew" Train System train system. As such (and unlike a starship) that means there are no turbolifts between the different sections of Amity - to go from one section to the other requires people use the train.

Within each section there are methods to get between floors (such as elevators, or turbolifts in the more Starfleet oriented sections such as Engineering). There are stairs between the Ground Level and Mezzanine Level of the Grand Mezzanine. There is also a luxurious glass elevator that leads up from the Mezzanine to the Spire.

Crew, civilians, diplomats and guests all live or stay on the outpost in apartments or hotels. A Starfleet officer will typically live in an apartment in the Habitat Ring rather than cramped quarters that would be found on a starship!

Eiffel Tower-like communications array, capped with three tall thin structures. Directly underneath the array is an observation deck and a restaurant called "Lighthouse"

Very upmarket, silver service. Situated next to the Observation Deck. The entire restaurant Including the observation deck) can be exclusively reserved by the Diplomatic Corp for official diplomatic functions.

The Grand Mezzanine is a lavish section located at the topmost part of the station under The Spire. It consists of a Mezzanine level and a Ground level.

The top half of Copernicus Center runs vertically through the middle of the Grand Mezzanine.

The Spire is visible through the transparent roof of the Grand Mezzanine.

The Mezzanine level contains establishments against the outer wall of the station. The inner part of the "ring" contains a large walkway, and a rail that allows for viewing of the ground level below.

Two flights of steps leads from the Mezzanine level to the Ground level below.

The Copernicus Center is essentially a "skyscraper" located within the outpost that has retained its original name as a tribute to the station's previous life. The structure rises from the bottom of the shuttle bay, up into the Grand Mezzanine all the way to the top of the station, where it meets with the base of the Spire. 66 metres (216 feet) height. 15 floors, Ambassador Rivi Vataix’s office is located on the 15th floor. Starfleet Ops is located on First Floor.

Federation Diplomatic Corps have access to all Starfleet levels, and vice-versa.

Ops is located on Level One of Copernicus Center (this is the equivalent of the bridge on a starship).

A large main viewscreen is located in Ops, similar to that of a Starship.

The Terminals are primarily used for the transit of passengers and freight, but do contain some smaller eating venues and food outlets. Each of the three terminals are nicknamed "A Town", "B Town", and "C Town" respectively.

Terminal A - Passenger and Transport Terminal

Contains all Starfleet auxiliary craft, excluding the Independence-B which is located on Terminal-A.

Each bay entrance is about the width of a Galaxy or Sovereign class main shuttlebay.

The three docking bays lead into one circular "donut" shaped docking bay, the space inside is all connected. The lower half of Copernicus Center (including Starfleet Ops on the bottom floor) is located at the centre of the shuttlebay.

The shuttlebay is divided into three connected sections - Alpha, Bravo and Delta.

Supplies can be stored for ships operations, and repairs can be conducted if a ship is so badly damaged that repairs on the outside of the Outpost could be slower than made in a pressurized atmosphere. 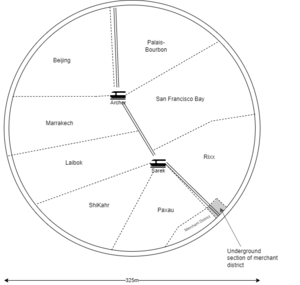 The Habitat Ring contains apartments and different named districts. Each district contains a different theme, and can contain different environmental conditions. Most districts are named after significant places in the Federation, with the exception of Paxau which is named after a region on Talax. 392 metres in diameter. 49 metres in height. Artificial sunlight

French themed. Named after the 7th quarter (“arrondissement”) of Paris

Named after location of Starfleet HQ and Academy

Named after where Parliament is located on Andoria, a founding member of the United Federation of Planets.

Named after the major city and birthplace of Ambassador Spock major on Vulcan, a founding member of the United Federation of Planets. District with higher temperature and gravity.

Named after region on Talax.

This small area acts as a "sub-district" within Paxau, and is located located on the outer edge of the greater district. It contains a small amount of vendors that could not get a retail space on the Grand Mezzanine, chiefly because their wares are considered "alternative".[4]

After an initial security incident in the district involving Ikaia Wong and Jaxon Fargo[5], security arrangements were doubled, making the Merchant District safe. It is routinely patrolled by Starfleet security, their appearance acting as a deterrent to any potential crimes being committed.

The park itself is a botanic garden cared for by the outpost's botanists and gardeners and is populated by small organic offerings from across the Federation. Small openings throughout the garden host holographic panels programmed to display religious or cultural symbolism. The objective of the peace park is to provide a refuge of peace and serenity for all. It may be of service to many beings. It also serves as a venue for teaching.

Situated in section directly under the habitat ring. Approximately 205 meters diameter at the base, and 220 meters at the roof. 32 meters in height.

Area dedicated to interfaith and multi-cultural harmony, featuring many symbols from different faiths, cultures, and communities. 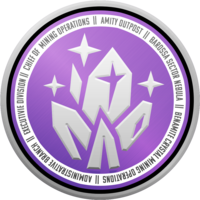 Dedicated mining section that houses civilian organizations that mine the Solar nebula and surrounding larger nebula. Located in the middle of the lower terminals D, E and F. Currently it is home to many mining companies, but the biggest one being the Benamite Crystal Mining Operations tea, which is currently led by Evelyn McLaren.

Colloquially known as "The Basement” due to its location at the tip of Amity’s ventral tower.

Amity's Science and Research Section includes a number of labs which have been modified from their original purpose (Borg research) to suit other fields. As such, lab spaces remain somewhat flexible and modular.

Two elevators in a circular shaft run through the middle of the entire section, allowing access to each floor. 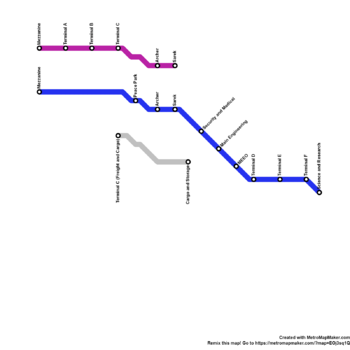 Amity is serviced by an automated train system that travels from section to section by traversing the perimeter of the outpost (inside the hull). It is nicknamed "The Corkscrew". It runs two train services: Upper Terminals Service ("Purple Line") and Amity Service ("Blue Line").

Each section of the Outpost has a train stop.

There are two train services to allow people to get around Amity.