T'Pen: We gather here today to dedicate a new ship and to remember the legacy that is CHALLENGER. ::She paused for a moment before going on.:: There have been many ships with the name CHALLENGER. Our beloved CHALLENGER, NCC-12886, was lost several months ago to enemies sworn to exterminate the Federation. It was a great loss. One that I've personnaly wept over.

::She looked to her left where the brass ships bell sat. Taking up the brass rod, she tapped the side.::

T'Pen: One ring for the ship we've lossed.

::She closed her eyes, then rang the bell, repeating the name of each crew member lossed since NCC-12886 was launched 4 years ago.::

T'Pen: One ring for each officer, enlisted and crewman losted.

::Breathing heavily after the ringing ebbed.::

T'Pen: STARFLEET and the Federation Council have placed a great responsiblity into our crew's hands. Not only are we launching the U.S.S. CHALLENGER, NCC-12886-A, but we are now the spearhead of STARFLEET's Seventh Fleet which will be stationing itself, here at DS24.

::She took the glass set before her, raised it before the crew.::

T'Pen: To my crew, may each of you find your fortunes among the stars. To the CHALLENGER-A, may she fly the stary seas seeking out the unknown and the endless possibilities. We dedicate the U.S.S. CHALLENGER-A. May her name live on in the annals of history. 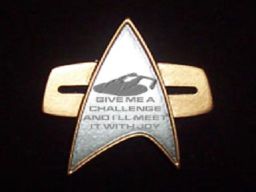 Turner: If you all will line up as if for inspection, I'd like to present a gift to you.

::As they lined up, Toni smiled at Jaxx, and he brought the first tray, covered in black velvet, then stood beside her. When they were all lined up shoulder to shoulder, Toni uncovered the tray revealing new commbadges.: :

Turner: To honor our lost crew members and our great ship, the USS Challenger, from this day forward, her last Senior staff will wear this special commbadge etched with the likeness of the Akira class Challenger and our motto. Let us never forget the people who met the ultimate challenge.

::Walking down the line, Jaxx took care in removing each of the officers standard commbadge, replacing it with the new one. He smiled to each of the young officers as he swapped out theirs. With three left on the tray he moved to Toni, replacing hers and then stood still while she swapped out his.::

Launch of the NASA Shuttle Challenger 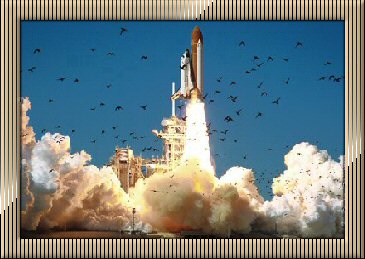 Challenger's 10th flight was to have been a six-day mission dedicated to research and education, as well as the deployment of the TDRS-B communications satellite.

Crew of the NASA Shuttle Challenger 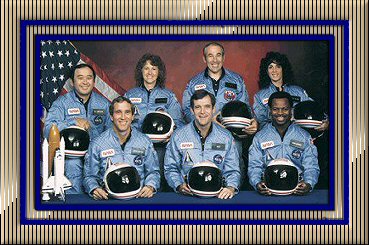 T'Pen: Let it be said that the crew of the U.S.S. CHALLENGER will meet everything with joy.

Ronald Regan, President of the then United States of America gave us the motto for the Challenger: “Give me a challenge and I’ll meet it with joy”.

Let it be said that the crew of the U.S.S. CHALLENGER will meet every challenge with joy.