Cmdr. Karynn Ehlanii Brice is currently the Chief Counselor on the USS Columbia. 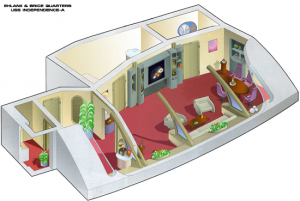 "The hours I spend with you I look upon as sort of a perfumed garden, a dim twilight, and a fountain singing to it... you and you alone make me feel that I am alive. Other men it is said have seen angels, but I have seen thee and thou art enough."

"All four parts have battery powered anti-gravs so you can move them around as needed. That system would also magnetically lock it to the floor, and it would work through the carpet we normally have in quarters. They clip together in pairs; cabinet and oven, sink and ‘fridge. The sink includes a closed-circuit replication system to generate water and eliminate whatever goes down the drain. You’ll may have to replenish its matter stream every so often, but the recycling should keep that to a minimum. Current power plan is inductive, meaning you won’t actually need to connect them to Columbia’s EPS conduits. Just set them up beside whichever bulkhead holds your EPS network tap, right up against the wall, and you should be good to go."

Karynn does not have a specific religion. She believes in some higher power, but has not really decided what that means for her. She has picked up spiritual practices from many different cultures, including many forms of prayer and meditation. She is particularly fond of Vulcan meditation practices.

Generally peaceful and gentle - but with a sharp side if you cross her.

She is on the shorter side, so she may ask for help in reaching items that are high.

Father: Kolen Ehlanii - structural engineer, employed by the city of Larysta.
Kolen is 5'8" with dark brown hair and dark brown eyes. He is often described as a "jolly" person, with a ready smile for anyone who passes. He is often found laughing and telling jokes. He was born on stardate 233302.16, and attended the University of Krysenti, where he recieved a BS in Structural Engineering. He met Maryasta while working as a consultant on the Larysta Orchestral Hall.

Mother: Maryasta Ehlanii - Professional Musician in the Larysta Symphony Orchestra
Maryasta is 5'4 with light brown hair and deep green eyes. She has a quiet persona, but usually comes across as pleasant and slightly shy. She comes alive, however, when she plays any musical instrument. While she plays the Haliian equivalent of a violin in the Larysta Symphony Orchestra, she is also quite good at the piano and the Haliian Flute. She is proficient at a number of other woodwind, keyboard, and string instruments, although she has rarely picked up any brass instruments. She is responsible for the Ehlanii family rule requiring music lessons for all the children up through High School. Because of her efforts, Karynn and both her siblings are both proficient at musical instruments and music lovers.

2 - Karynn is the oldest

Karynn has a healthy relationship with her family. While she and her siblings had a normal sibling relationship, complete with the typical fights, she is very close to her sister Lynette, who Karynn sees as one of her very best friends.

Karynn grew up in a loving family on the planet Halii where she was born. Her love of the hard sciences was cemented by her grandparents when she was 3 years old, with the gift of her very first chemistry book and chemistry set. She generally did well in school and was awarded both in High School and College for her work in the sciences. Karynn is the first in her family to join Starfleet, a decision she was prompted to make after hearing a prominent Starfleet Scientist speak. She failed her first attempt to enter Starfleet Academy with poor marks on the History portion of the entrance exam. This failure prompted her to study and work to excel at History. After a semester at the University, she joined the preparatory program and was later accepted into the Academy. She began pursuing a degree in the sciences and had nearly completed that degree when, in her 4th year, she developed an interest in counseling. She finished her degree in the sciences and took a fifth year at the academy to begin her counseling degree, which she completed while stationed on the Independence-A.

Karynn developed two notable friendships while she was at Starfleet Academy, both with roommates. The first was with Catherine Bell, her roommate for the first two years. Catherine introduced Karynn to several Terran activities including whitewater rafting (on the holodeck), some Terran foods, and some Terran religious practices, especially those of Catherine's own Catholic faith. While Karynn didn't embrace the entire faith, she did pick up several of Catherine's prayer practices, including the use of prayer beads and candles. Karynn was sad when Catherine returned to Earth, but the two have stayed in touch. When Catherine left, Karynn's new roommate was Jenn Iyer. Jenn's most significant impact was on Karynn's change in career directions. In Karynn's fourth year at the Academy, Jenn developed a severe episode of depression. Karynn was impressed by the impact the Academy Counselors had on Jenn's life and realized the influence counselors could use to help others. Following this experience, Karynn stayed on at the Academy an extra year to begin working on her counseling degree.

For more information on these, see Personal Relationships

Academy Registrar Note: Ms. Ehlanii developed an interest in counseling near the middle of her fourth year at the Academy. She remained in classes an extra year to begin working on a degree in counseling before going on her Training Cruise in her sixth year at the academy. She completed the remainder of her courses post-graduation and was awarded a degree in Counseling in 2387.
Academy Transcript

Pictures of the Brice Family