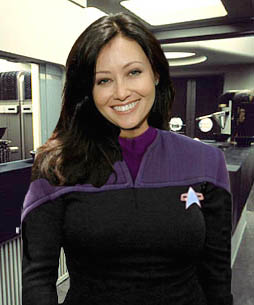 Sarion is tending bar in the Free Spirit lounge aboard the USS Independence.

Sarion lived a war torn terribly scary El-Aurian childhood. She was forced into a refugee life as the Borg began to control her home planet. She traveled with her parents attempting to reach freedom from Borg space. However her father was killed saving his children. As a result Sarion harbors a deep fear and an intense hate for the Borg, though she has learned to control her emotions and stay in control of her actions. It is the fear of reliving these memories that keeps her from using her surname often.

Slowly wondering through space she eventually came upon Federation space and slowly realized her calling to listen to other people, and eventually went to school to become a counselor, at 150, but decided that such a formally defined position wasn't for her. This drew her to bartending. She found she could talk to people, or more listen, and share what she'd learned through the years, while also serving others. Who doesn't like a drink?

Since taking up residence on Federation vessels she has managed to gain two lounges, one on the Ronin and one on the Independence-A