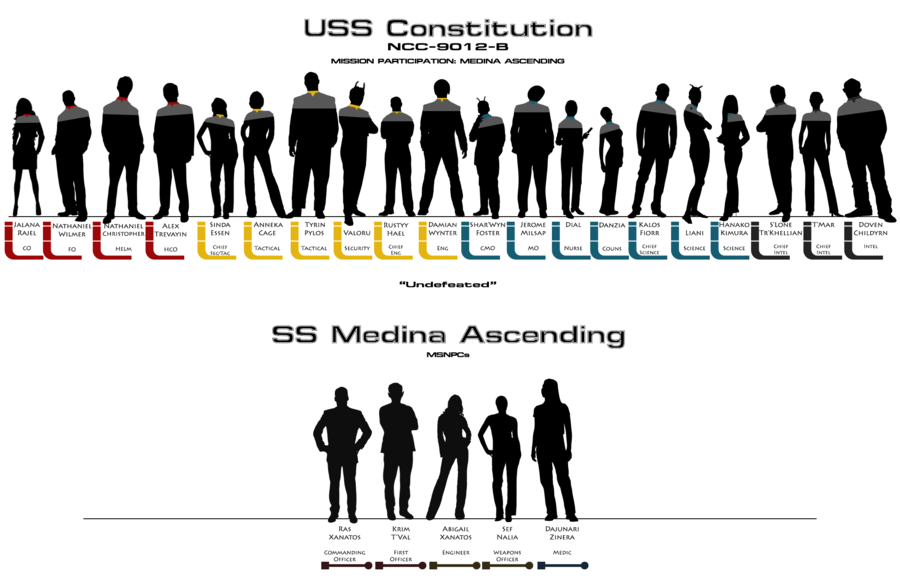 Following the transfer of crews and the reactivation of the USS Constitution (NCC-9012-B) the ship begins its journey disembarking Deep Space 285. With the SFI investigations of the crew concluded, the Constitution set out under the guidance of Commander Jalana Rajel.

Headed to Starbase 11 to establish a new home base under the power of the quantum sleapstream drive, the crew picks up returning family member Lieutenant JG Liani. En route, the ship received a general distress call from the SS Medina Ascending; a commercial dilthium freighter. After speaking with Captain Ras Xanatos, captain of the freighter, the crew learns that unknown aliens have attacked the ship, and caused severe damage.

"We were attacked, by some... unknown aliens. They boarded our ship, offloaded our supplies. Most of the damage we've suffered was from internal weapons fire, trying to ward them off..." Captain Xanatos told Commander Rajel.

Lt. Cmdr. Kalos Fiorr, having a few suspicions on the origins of some of the damage informed Commander Rajel. Rajel then sent an away team to investigate, ordering them to offer whatever help they can, and save the lives of the already injured. First Officer Nate Wilmer, recently promoted LtCmdr Shar'Wyn Foster, Lieutenants JG Rustyy Hael and Damian Wynter and a small security detail, proceed.... proceeded to the Medina Ascending, to begin their mission.

After Ras Xanatos fears began to manifest that Wilmer may be asking too many questions, he ordered his wife Abigail Xanatos to imprison Wilmer, in their local holding room. Wilmer attempted to talk his way out of his imprisonment, while Rajel on the Constitution began to become suspicious of his sudden disappearance from all sensors. After being informed about suspicious Xanatos' suspicious behavior by his first Officer Krim T'Val, Rajel formed a boarding party to rescue Wilmer, consisting of herself, Ensigns Anneka Cage and Valoru and confronted Xanatos.

Unbeknownst to Rajel, Captain Xanatos, a liberated member of the Borg Collective, had a backup plan already in works. Using Bynar technicians, Ferengi technology and his life savings, he reprogrammed the remaining Borg implants in his body to replicate thousands of nanites, which would spread throughout the ship and visitors. It is unclear at this point if he still has a connection to the collective.

With the reported suspicions of Krim, and the scientific efforts of LtCmdr. Kalos Fiorr and the crew, attempts were made to locate and identify the nature of the sensor ghost which was previously discovered. After reports from Rajel, and much work, it was found to be a Ferengi Mind Sphere, connected to Xanatos, which he uses as a communication relay between himself and the nanos. The crew hopes to reprogram the previously cloaked Sphere, close to the Medina Ascending. Fiorr, enlisting the assistance of Ferengi bartender Zogi, worked diligently on the problem.

“H0ah! No! You couldn’t be more wrong. Rule of acquisition number 190 clearly states: Hear all, trust nothing.” was Zogi's reply to several suggestions of solutions to the problem, posed by the Constitution crew.

Using the threat of mental commands linked by the mind sphere in combination with the massive amount of nanos on board of the Medina Ascending, Xanatos would either receive all the repairs, equipment and food that he demanded, or every Starfleet officer, able bodied crewman and civilian would become new members of Xanatos Collective.

After issuing his demands to Rajel, Xanatos then activated the auto-assimilators regardless of the compliance to his threat, attempting to enslave the entire crew to his will. Little did Xanatos know, the nanites were damaged by free floating pockets of gas which were throughout the ship. These nanites reverted to their original programming, and infested Xanatos body, which then “super Borgified”.

The now, completely insane Xanatos, attacked Valoru. Had it not been for the quick actions of Rajel, the young Ensign may have very nearly died. Xanatos is now transported to the Constitution, to attempt to save his life by removing the implants, or find out more about the connection to the Mind Sphere.

The crew now tries to clean up the damage of the aftermath, wondering how the ship, crew, and deranged Xanatos should be best dealt with, though that did not go over without a hitch either. Just before sending this report, activity of the mind sphere was caught by the Constitution sensors. Does the sphere attempt to call the Collective? We will find out.

The crew of the USS Constitution-B, under the command of Commander Jalana Rajel, scrambled to counter an invasion of Borg nanites on their ship. The Borg threat appeared after the Constitution came to the assistance of the freighter, SS Medina Ascending. What Rajel and her crew did not know then, however, was that Ras Xanatos, the Captain of the Medina Ascending, was a liberated Borg who attempted to assimilate the away team with by dispersing his nanites across his own ship. When a sample of the Medina Ascending's hull was innocently brought in for study, it also brought along those very same Borg nanites, triggering a red alert.

A team of engineers worked to disable the nanites, while a medical team worked to save Xanatos after he was driven mad from all the nanites re-entering his body. The engineers devised, with the help of the Intelligence department, managed to disable the Borg shields and install an advanced computer virus to lower their defenses long enough to be destroyed.

"If a frequency is found to disrupt the nanites shielding, a much lower electromagnetic pulse would be as effective on them and would not be as harmful to our equipment, " Lieutenant junior grade Jack Gard explained.

While the engineering team put their plan into action, Rajel dealt with her First Officer being transferred to a covert assignment. Rajel eventually selected her long time friend Lieutenant Commander T'Mar to take over that role. T'Mar had previously served in that capacity on another ship prior to transferring to the Constitution. With the staff situation and the Borg situation resolved, the Constitution- with the Medina Ascending in tow- made its way toward StarBase 11 for some well deserved shore leave. Some crew began celebrating in the ship’s lounge, while others began planning for a round of poker.