The name Resolution has a lot of history behind it with numerous ships brandishing the name; predominately within the Royal Navy. With the first known ship with this name being commissioned in the early 17th century, their has hardly been a period where this name is not being used.

The first ship to bear this name was not in fact christened as Resolution but instead as the Prince Royal. She was built in 1610 as a 55-gun ship of the line who was the first ship to feature three complete gun decks. From 1639 to 1641 she was rebuilt to carry 70 guns. After the monarchy was defeated in the British Civil War, the ship was renamed the Resolution to hide it's royalist roots. It held this name during the period of the Commonwealth of England up until the restoration of the monarchy in 1660. After fighting in the first and Second Anglo-Dutch War, she was surrounded and forced to surrender to the Dutch. Here she was burned and lost on the 3rd June 1666.

This 50-gun third-rate frigate also did not start its life as the Resolution but rather as the Tredagh after the Irish town Drogheda. After the restoration of the monarchy, she was the second ship to be named the HMS Resolution, which is the name she served under until she was last. After fighting in battles such as the Battle of Lowestoft she was drove aground and sunk in the St. James's Day Battle on the 25th July 1666. 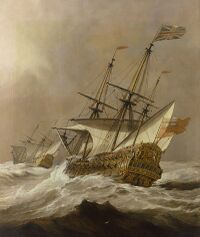 This was the third ship to be named the HMS Resolution and served an illustrious career spanning 35 years. The 70-gun frigate was the flagship in an expedition against the Barbary pirates in 1669. She also served in the fleet which attacked a dutch convoy resulting in the Third Anglo-Dutch war. She was rebuilt in 1698. In a storm in 1703, she was crippled and after a failed attempt to forcibly beach the ship, Captain Thomas Liell was forced to abandon ship. In 2005, the wreck of the ship was found by three divers retrieving a lobster pot.

The fourth resolution was a very short-lived ship serving only two years before her loss. The 70-gun third rate ship of the line served in the War of the Spanish Succession. In an effort to escape the French, she ran ashore the coast of Ventimiglia on 21st March 1707.

The fifth ship to bear this name met a very similar fate as it's previous iteration. After being built in 1708 (as another 70-gun third rate ship of the line), she led a short three-year service in the War of the Spanish succession after succumbing to environmental factors and being wrecked near Barcelona on 10th January 1711. 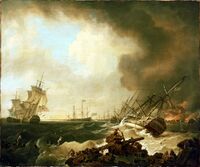 The sixth HMS Resolution was a 74-gun third-rate ship of the line launched on 14 December 1758. In her eleven months of service, she took part in the Seven Years' War most notably at the Battle of Quiberon Bay. During the battle, she took surrender of the French ship Formidable. However, in the morning after the battle, the Resolution was found to be wrecked and demasted on a shoal where she was lost.

Arguably the most famous Resolution, this sloop was the flagship of James Cook for his second and third expedition. She served at the same time as the seventh and the ninth HMS Resolution. Originally launched as the Marquis of Granby (as a collier) in 1770 she was bought by the Royal Navy for (what would be today) half a million pounds. Originally renamed HMS Drake, there was worries this would upset the Spanish so her name was changed to Resolution. After a refit with the most advanced navigational equipment of the time, she departed Britain on the 21st June 1772. Due south, she passed the Cape of Good Hope and was the first ship to cross the Antarctic circle on 17th January 1773 (Second voyage of James Cook). On this voyage she did this another three times and proved the Terra Australis theory to be wrong. After returning, she made another voyage to cross the Arctic circle on 17th August 1778 (Third voyage of James Cook). The death of James Cook caused the voyage to be cut short and the Resolution returned to Britain on 4th October 1780. Her post-exploration service consisted of being an armed transport. She was captured by the French in 1782. After the 22nd July 1782 her fate is unknown and she was never seen again.

The ninth HMS Resolution was a cutter built in 1779 and is known for capturing a number of ships during her service. During the 1780s, she captured a number of ships and later she participated in the French Revolutionary wars at the Battle of the Hyères Islands. On 3rd June 1797, she captured the French privateer Pichegru but only a few days later, she was declared missing presumed floundered. She was never saw again.

The tenth HMS Resolution was a Royal Sovereign-class pre-dreadnought battleship with seven sister ships. Being launched in May 1892, she was commissioned the following December. She served in many functions during her career and participated in many notable events but she never saw combat. In 1897 she was at the fleet review for the diamond jubilee of Queen Victoria. Following the coronation review of Edward VII, she was paid off for a refit in 1903. Following the refit, her service was fairly uneventful and she was sold for scrap in 1914 due to being obsolete. 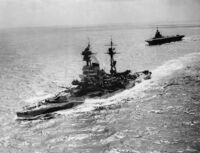 The eleventh HMS Resolution was one of five Revenge-class battleships built for the Royal Navy. She was launched in January 1915 and commissioned in December 1916: with the majority of her service being in WW2. The years between both wars were uneventful for her. However, when WW2 broke out, she was immediately pressed into service. She took part in the Battle of Narvik and the Battle fo Dakar where in an attempt to sink the French battleship Richelieu, she was torpedoed by a French submarine. This crippled her and after repairs she was decommissioned in 1943. Immediately post-war, she was scrapped in 1948.

The twelfth and final HMS Resolution was the lead-ship of the Resolution-class ballistic missile submarines. She was launched in September 1966 and then commissioned in October 1967. Serving at the height of the cold-war, she completed 69 patrols before her decommissioning on the 22nd October 1994 after the newest class of submarine had been built. As of 2020, she remains docked at Rosyth dockyard with her nuclear reactor defueled because of concerns about plan to remove the radioactive components of the ship.