From 118Wiki
(Redirected from Orman, Katy)
Jump to navigation Jump to search

Lieutenant Commander Katy Orman is the Chief of Security for Starbase 118.

Katy is a shy person; this is often at odds with how confident she is when she's in her element. In social situations she tends to be quiet and retiring. In order to become acquainted with her, a person generally has to seek her out. Once the ice is broken, Katy is a very engaging person in small groups.

She is a person of extremes, prone to fits of nervousness and likewise to take-charge confidence

Her greatest passions are martial arts and thought-experiments.

Katy's best friend is an artificially intelligent device bequeathed to her by her uncle, which she calls 'Unky'.

Her other best friend is Ash MacKenna, who she met on her first assignment. The two can frequently be found together when off-duty.

Katy rarely gets into romantic relationships, due to her shyness. When she does, it is more often with women (she's about a Kinsey 4.5).

A lot of Katy's on-duty socialising is not with other officers, but with the crew and NCOs in her department.

She has been in love with Ash since shortly after they became friends. She kept this information secret for years, and has only recently admitted her feelings. She was delighted to find them reciprocated, and the two are now more openly living what observers of the two had figured out long before.

Although only 1/4 Orion, Katy's grandmother's genes run strong in her. Her variances from human norm are as follows:

« Skills and Abilities of Note » 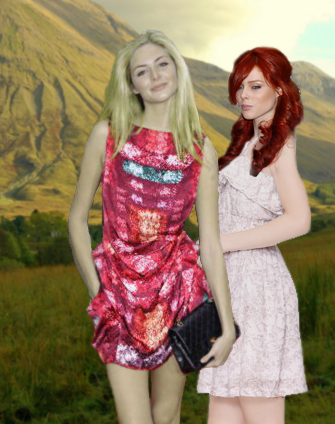 Katy Orman and Ash MacKenna at a meet & greet on the USS Victory. The holodeck was simulating the Scottish hills.

Katy is accomplished in an unusual martial art she calls Shiji Gungfu, which she claims to have been trained in since childhood. She seems to be quite skilled with it, having reached the finals of The Clashing.

She knows a number of meditative disciplines, which include limited control over otherwise unconscious body function.

She is an extremely good programmer.

She has become very skilled at reading body language and facial expression.

It was recently discovered that she appears to be immune to hypnosis. She has no idea why. Unbeknownst to her but knownst to us, this is due to hypnotic defences put in by Unky so that only he would be able to put her under.

Katy is a 'time sensitive', which despite the impressive name mostly involves feeling sick when something goes wrong with time nearby.

« Skills and Abilities of Note for Very Different Reasons »

Katy is a horrible cook.

She enjoys learning to play the fiddle, despite having no talent at it whatever. Others nearby do not enjoy it nearly as much.

She has almost no ability at mental spatial manipulation or three-dimensional visualisation. This carries over into such skills as piloting and navigation, at which she is terrible.

She's not good with large crowds of unfamiliar people, and has been known to panic occasionally in such situations.

She is also a pretty bad liar.

Katy ignores the tradition of addressing people by rank whenever possible, preferring first names even with her superiors. Along the same lines, she insists that all her security people call her by her own first name.

When nervous or excited, she tends to babble. Unless she's concentrating on her job.

While on the job she can generally be found out with the various security teams, or in her office; she eschews the hub of the starbase or the bridge of a ship, preferring to be 'where the action is'.

She speaks with an accent close to a 'Home Counties' accent.

Katy's current office on the Excalibur is on deck 3, which she isn't entirely happy about (preferring something on a lower deck). The chair is comfortable (though the guest chairs not so much), the desk is a marvel of technology so magnificent that Katy has considered writing poetry to it, there is some (as-yet-empty) shelving on one wall, and a painting of a beach scene from Agurtha.

Former Offices
Katy's office on the starbase was on deck 512, the same deck as one of the main security offices, near the main brig. It was always sparsely-furnished and had three doors - a door to the corridor outside, a door to the adjoining security office, and (most vital of all, in Katy's thinking) a door to a small private lavatory. The second door she often kept in open position, just to facilitate interaction with the other security officers on duty.

Her office on the Victory was somewhat smaller. It was located on deck 9, just around the corner from the Brig and down the hall from the Armoury, and featured the most comfortable chair Katy has ever sat in.

Katy's current quarters are on deck 9 of the Excalibur. They are spacious, and furnished with an interesting combination of high-tech-modern and worn-and-comfy that somehow mostly works together. The lavatory is huge, with a luxury shower fit for a deity, the bed is super-fluffy, and it even has a small private chamber with a mini science lab. The walls are decorated with various paintings, each in a different medium and each depicting somewhere Katy has called home in the past.

Former Quarters
Her starbase quarters were a cozy one-bedroom apartment in the habitat section, deck 905. It never really looked lived-in, save for the messes she would leave there; discarded laundry lying about randomly and such. Her kitchen, however, was spotless, due to its state of pretty-much-never-being-used.

On the Victory, her quarters were on Deck 9, amidst the crew quarters. The rooms were practically bare.

All iterations of her quarters do have what she considers to be the two most important features of living-space - a big, sturdy bed for flopping down (and occasionally jumping) on, and a lavatory with a real, honest-to-goodness shower.

Katy has a device implanted in her body (a small crystalline gadget of nonhuman technology which is attached to the fascia of her abdominal wall and somehow hides itself from medical scans) which separates her from the psionic field and thusly makes telepathic contact of any sort impossible with her. 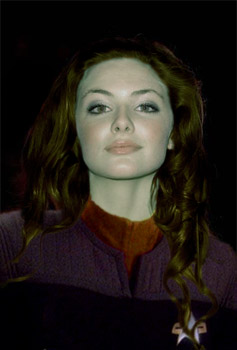 Katy was born in the third generation of the Orman Group, a line marriage based on Ganymede whose members are also a think-tank/research group on artificial intelligence and its related fields. She was educated at home by her whole (very large) family and their close associates, and she was an avid learner. As a result, she gained a great depth and breadth of knowledge quite young.

Perhaps ironically, the person Katy ended up gravitating to the most was not an 'official' part of the family at all, but an associate who lived in the complex throughout most of her childhood and early teens. She called him her uncle, and from him she learned skills more martial and esoteric than she had learned from her 'real' family.

Out On Her Own

By the age of 16, she had long decided that she was not going to take up the family busines, she met Danni and Jean-Pierre Miles, a young couple who were vacationing in Paris at the same time as she. There was a lightning romance not uncommon for people of that age, and Katy shipped out of Ganymede for Proxima colony, where the couple lived.

Life was not easy for her on Proxima. The colony was not cosmopolitan at all, made up of only humans, and Katy's skin tone and highlights made her stand out there. Some thought her exotic; most just found her to be 'different'.

Throughout it all, she got correspondence from her 'uncle', telling her about the joys and tragedies of his life in Starfleet. Eventually, however, one of the tragedies was too great and she got a final farewell.

Katy stayed on Proxima for nearly 5 years, but was never able to really feel at home there. The relationship with the Miles's had long since failed, and in 2380 she decided she no longer had any reason to stay. There wasn't even any question in her mind of where to go from there. She took the first ship to Earth and enrolled in Starfleet Academy.

In the Academy Katy at last felt on track. Having found the entrance exam to be non-challenging, she was pleased to encounter a great many classes that stretched her mental and physical abilities to the limit, and indeed made her find new limits beyond those. There was a welcoming multicultural aspect as well, which she found very pleasing. Most of all, she was buoyed by the sense of purpose that she found in all of her fellow serious students. It was, put simply, ideal.

She finished her classes with high grades in most subjects (a few, like piloting and navigation, she never did get the hang of and just managed a passing grade there) and a specialisation in security, and it was with a nervous anticipation that she boarded the ship for SB118 for her cadet training mission. 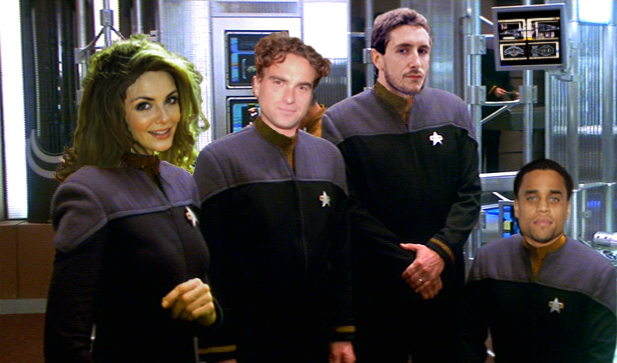 Her first assignment came in August, 2384, to the USS Resolution. There, she learned a great deal about teamwork and leadership, and formed her own hazard team. In October of 2386, upon the dissolution of that crew, she was reassigned to the USS Eagle, where she was to find some familiar faces.

A traumatic confrontation onboard the Eagle caused her to take an extended leave of absence after a panic attack at the end of shore leave. Upon returning to duty in June of 2387, she joined the USS Victory on a rescue mission to find the missing Eagle. She served as Chief of Security on the Victory until a poisoning on an away mission caused her to behave strangely, attacking a Cardassian crewmember - an event she has no memory of.

After being sent back to earth for recovery, her security clearance was revoked until further notice and she was placed on open-ended leave, until such time as Starfleet Security could be certain she had not been compromised. Her attempts to make the most of this enforced leave were dashed with the death of her mother Mags, which sent Katy deep into depression.

After that, Katy joined an illegal fighting tournament known as The Clashing, and began moving up through the ranks. It was this that brought her back to Starbase 118 in August of 2388, where during a terrorist action she once again was drawn into Starfleet events.

Soon after, her commission and clearance were reinstated and she began handling the Security department on Starbase 118 & the USS Victory as Chief of Security. However, she was unable to withdraw from The Clashing, and after a number of fights came to her, she left the base for a time to participate in the finals. She arrived home technically victorious, but only due to the real winner refusing his victory. She was rushed home just in time to deal with a tense situation on the starbase regarding a freighter of expired medicine that had been bound for victims of a Romulan plague.

It was that same plague that led to Katy, and the rest of the senior staff, being transferred to the newly-commissioned USS_Excalibur-A, bound for Agurtha, where they were to confront intrigue as well as infection...

Missions on the USS Resolution

Missions on the U.S.S. Eagle

Missions on the U.S.S. Victory

Missions on the U.S.S. Excalibur-A