Unky is an artificial intelligence made with Category U level technology. His primary function is to teach, nurture, and assist Katy Orman as best he can. 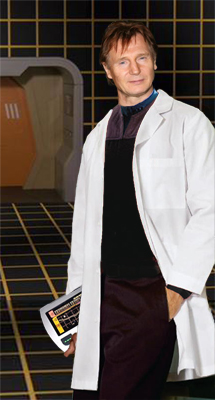 Unky relaxing on the holodeck

Normal: Unky is a small device that appears as a small crystal polyhedron approximately an inch high and four inches across, in the shape of a hexagonal prism with a hollowing on top, like a shallow bowl. It sometimes, but not always, emits a white glow when active.

Interface: Additionally, Unky sometimes presents a humanoid image as an interface of sorts. The image is approximagely 8 inches tall and translucent. The figure presented is invariably the same: a middle-aged humanoid male, generally wearing a starfleet uniform lacking rank pips underneath a white lab coat. The image is animate, but cannot move from on top of the crystal.

Holodeck: Unky sometimes appears on holodecks (or other places with holoemitters) and interacts with others as though he were a normal person, taking the same form as his interface form (except life-sized, opaque, and solid).

Excalibur: Upon Katy's transfer to the Excalibur-A, Unky found that every part of this brand new vessel was set up with holoemitters, in order to give EMH's greater emergency access. He now wanders where he pleases, introducing himself as 'Doctor Hayt Ivrel, Retired.'

Unky is telepathic, an ability which can be switched on and off, and is usually off.

He has the ability to access computer systems with no physical connection.

Unky was created by Lt Cmdr Dr. Hayt Ivrel, a time-and-dimension-travelling alien, upon his unofficial leave of absence from Starfleet and departure from this universe. He is essentially a copy of the memory and personality of Ivrel, with a few modifications and restrictions, and it is his image that Unky takes. Upon creation, he was delivered to Proxima colony, whereupon he has been assistant, guide, friend, and occasional portable music player to Katy as she continues her career.