From 118Wiki
(Redirected from Eagle)
Jump to navigation Jump to search

Starting stardate 239510 a new, democratic government is rising on Cardassia as it continues recovering from the Dominion War. This fragile empire is being forced by the Federation and its allies to secure its border, pulling back from spaces it previously occupied to focus on reconstruction and hopefully wean itself from outside support. One area it looks to abandon is the Aavaro Wilds, an annexed zone home to pirates and a seemingly unending array of challenges to Cardassian patrols. As it withdraws its troops and closes outposts, the Federation looks to explore this space and fill a power vacuum. The ship Starfleet has assigned to the task is the USS Eagle, commanded by Oddas Aria.

When the USS Eagle, NCC-74659, was launched in 2375 it was plagued by a recurring computer system problem which almost saw her withdrawn from service, but the arrival of the Dominion War meant that the Federation could not afford to waste any of its resources.

The Eagle was stripped down to a bare minimum, outfitted with extra cargo bays and used to ferry supplies wherever they were needed. For the most part she performed well, in no small part due to the Intrepid's high speed, but her continuing computer problems often saw her idling in dry dock. Slowly she was forgotten and come close to being mothballed. 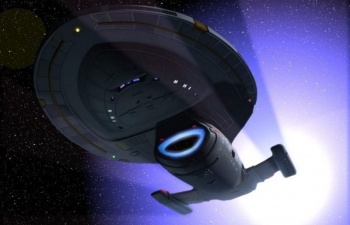 In 2384 Starfleet decieded to authorise the total overhaul and refit of the USS Eagle. It took a number of months to complete, but on stardate 238501.15 the refit was finally finished and the Eagle was ready for service. It had recieved an almost total overhaul to bring the Eagle back up to and beyond its original Intrepid Class specifications.

Space efficiency strategies were used to install sophisticated sensor equipment and shield generators as well as an increased torpedo storage and a larger aft shuttle bay. Due to the extra space, the crew quarters are slightly larger and more luxurious than on other intrepid class vessels. In addition, the computer systems were completely replaced with a state of the art Dual Core system with Bio-Neural circuitry and isolinear processors.

Filling the role of a long-range scout vessel, the refitted Eagle is quick and smart. Still a long way from being a warship, her upgrades nonetheless give her the resilience and fire-power required to hold her own in a combat situation, or the time to make a retreat if she is outmatched.

The Eagle's motto is the final line in a poem called "The Eagle's Cry" by an unknown poet from Earth. 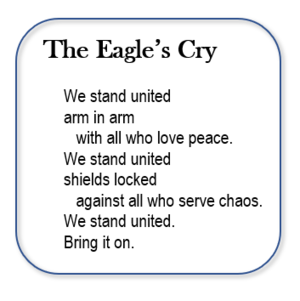