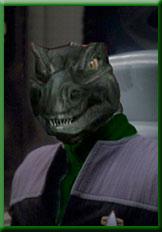 Ternok was born into a standard Gorn household. He had no real hardships. His family earned their place in the Gorn society, and his father was known for his research in Shield technology. Ternok grew up with 3 brothers. They would play together, but because Ternok was smaller then the other three, he would get teased alot. This form of harrasment by his brothers stopped on his 15th birthday, when Ternok ambushed them coming home form school. Though his father did not approve, Ternok did get a pat on the back for hospitalizing all 3 of his siblings. Ternok, fled the Gorn Confederacy ( Hegemony )to avoid Mandatory Indoctrination into the Gorn military. Ternok fled to an ally. The Klingons.

Ternok worked on Klingon vessels for one of the Houses on Qo'nos, learning the trade he knows all too well now...Engineering. He received room and board, and was allowed to sit in on many Klingon rituals and combat practices. Ternok also learned the language, and speaks Klingonese as if it was a second language. Ternok did 5 years on qo'nos, before he left for the Planet of Orion to take a job as an engineer on a freighter. He did 2 years on the freighter, before heading to the Federation to join the Academy and become a member of Starfleet. Knowing the fact that the Gorn and the Federation were at war not too long back, did not stop Ternok form applying. There was some apprehension to Ternok by the Federation, but Ternok was allowed to apply regardless. During his ages of 20 - 25 and his time in Starfleet academy, Ternok raised his son and went to school. His son Rellek is his only offspring to date. Rellek's mother was a Freighter FO, but wanted nothing to do with the child. That suited Ternok just fine. Ternok will boast at times that he is in Starfleet for his son. For a better life for them both.

Majored in Engineering. ( Warp ) Minored In Engineering ( Slip - Stream ) Also studied other forms of Core sources and was known for taking chances to prove a theory correct.

Did a short run with Academy Security to gain skills there as well. Presently Assigned to the Science Officers Station onboard the USS CHallenger ( A new position, but one Ternok is anticipating to be a learning experience )