Ensign Akoni Soriano is currently serving as a Intelligence Officer aboard the USS Constitution-B.

Albanos Soriano was an assistant for the president of the Foreign Services Department when he met Gaiana Ochalbor, a mere University professor who specialized in Alien Literature. Albanos contacted Gaiana, hoping to learn more about Vulcan customs and literature for the upcoming diplomatic visit to the planet. In the Freyden Coffee Shop, Albanos and Gaiana became deeply interested in one another, and promised to meet again. 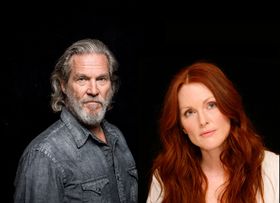 After the very successful mission to Vulcan, Albanos contacted Gaiana as he'd promised, and the two pursued a romantic relationship soon after their second meeting. They married on 236502.25. Happily wed and deeply in love, the couple tried for a child. Gaiana was pregnant for 8 months before falling very ill from heavy stress. As her situation became life threatening, the doctors had no choice other than to save the unborn child, 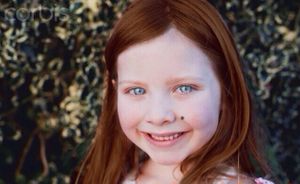 or to go through with an abortion to save Gaiana. Unable to make the decision herself, Albanos was forced with the decision to choose between his wife or 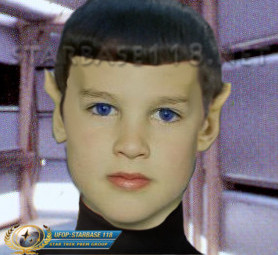 his future child. In the end, he chose Gaiana, unable to consider his life without her by his side. Gaiana made a slow, progressive recovery and eventually returned to full health. She fell into a depression the following year at the loss of her baby, fracturing the marriage. The two blamed the lack of science for the loss of their child and developed a deep hatred for anything that concerned the area. After another year of therapy, Gaiana and Albanos regained their spark and confidence and decided to try for another child after much contemplation. And so Akoni was born, healthy and devoid of any diseases. Akoni was an only child, as her parents considered her a blessing, afraid to try again when the first attempt had ended horrendously. As a child, Akoni was loud, bright, and intelligent. With no other siblings, she did not do well with sharing her items, as she was, and is still, highly 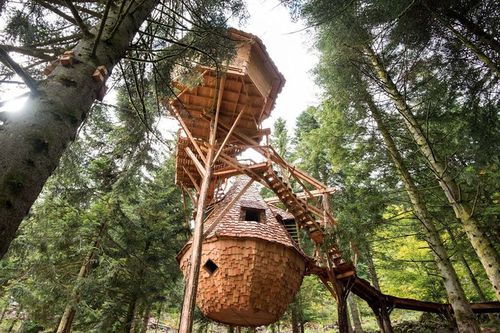 This is the Soriano cabin. It was built by Albanos and several of his interplanetary colleagues. The design was a collaboration of Vulcan, Betazoid, and Klingon architecture. The hanging rooms came from the Vulcans, the sloped and rounded bodies of each room, connected through external walkways was Betazoid, and the sturdy, calculated location of the support beams to hold up the walkways and prevent the rooms from falling was Klingon.

materialistic, though the reason for this changes over time. Her parent's teachings of peace often went ignored as Akoni constantly fought with other students in and outside the classroom. While she was considered a trouble maker, Akoni had one somewhat close friend, Taudal Nirir. Taudal was a short, quiet spoken girl with short blond hair and dull brown eyes. The two were often project partners, and so became acquaintances. Their "friendship" however, soon faded into a mutual acknowledgment of one another as they realized their lack of shared interests.

When Akoni turned 8 years old, her parents pulled her from her studies for one month to accompany them on a special family visit to Vulcan. Albanos had made considerable ties with a Vulcan couple during his first mission there, the one Gaiana had helped him with before their marriage. The Soriano's met with Silok, T'Karik, and their son, Selar who was one year older than Akoni. Selar was a quiet, kind, and thoughtful boy who always put consideration into every word he said. Although he was immediately put off by Akoni's contradictory and loud behavior, Akoni was instantly drawn to him and his foreign persona and refused to settle for anything less than a mutual friendship. Akoni eventually understood Selar's dislikes for loud voices and erratic behavor. Keeping this in mind, she followed Selar wherever he went, despite his disapproval to this. At one point during the second week, Albanos amusingly called her "Selar's Shadow", much to Akoni's and Selar's annoyance. Akoni became quieter and more controlled of her outbursts, earning the interest of Selar at the change. The two began to speak more frequently, but mostly with Selar speaking over his should nonchalantly and Akoni curiously asking questions around corners. While the their parents were away, Selar took Akoni on "adventures", as she liked to call them, throughout the inside and outside of his house. More than once, Akoni would convince Selar to hide with her from the Vulcan housemaid, T'Veran, even though they both knew the inevitable lecture they would receive for doing so afterwards. The exchange in behavior led to a close friendship between the two as they grew to be best friends. Selar began to act more boldly and spoke more often, surprising his parents at the change in behavior. As an only child as well, Selar was often private about his affairs, seldom sharing his thoughts or opinions with others.

Since Silok and T'Karik were both professors at the Vulcan Science Academy, their influence was apparent in Selar. He would often show Akoni the equipment he'd received as gifts from his parents. Wildly interested in scientific items, Akoni grew a passions for Selar's favored field of interest, astronomy. The two spent most nights staring through Selar's telescope, admiring the beautiful Vulcan night sky that differed ever so slightly from that on Tandar Prime. By the end of their visit, Akoni and Selar had become inseparable, despite the faint friction that had sprung between them when the Soriano's arrived. The two exchanged comm addresses and easily stayed in touch.

On the return home, Akoni told her parents of the wonderful time she'd had with Selar on Vulcan. Albanaos and Gaiana were very pleased that their daughter had enjoyed herself, until she mentioned her new found love for the sciences. They immediately shunned her interests and scolded her for believing in time consuming and useless research. Shocked by her parents reaction, Akoni dropped her curiosity in science for sometime.

Akoni eventually met an older woman named Takakarai Esperon, an enthusiastic scientist who appreciated astronomy and chemistry who lived near the Soriano's secondary home in the woods. Akoni and Selar were properly introduced after being caught attempting to steal various items from Esperon's laboratory. 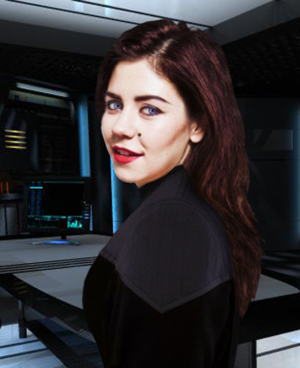 Akoni in her new position as a Intel officer.

However, the older woman's anger was short lived as she observed their curiosity of her workshop, and she eventually agreed to let them look around. She watched Akoni grow up from afar and was a major influence on the young Tandaran in her secret pursuit of her scientific studies. The setting would later become one of Akoni's favorite holodeck retreats. https://groups.google.com/forum/#!t )opic/sb118-constitution/R_4yd5pl7PQ

Later on in her high education, she was reintroduced to astronomy as well as starship engineering. Her interest was re-sparked and she secretly began to pursue them under her parents surveillance. As soon as Akoni graduated from her secondary schooling, she instantly applied to StarFleet and was accepted 2 months later.

Telling her parents about the news went horribly. They banned Akoni from attending the institution, declaring that she would be wasting her time on "hobbies". Frustrated at their lack of understanding, Akoni left against her parent's will since she was legally of age to live on her own. She left on shaky terms and hateful words, traveling to Earth to attend the StarFleet Academy in San Francisco, where she made several friends.

Akoni pursued her interests by majoring in astronomy and minoring in starship engineering. While she took several classes concerning anthropology and ecology, she practices it as more of a hobby.

After serving several months as a science officer on the USS Constitution-B, Akoni became overwhelmed with her position. After the 1914 mission and during the Unity rescue attempt, Akoni became overly engaged with a Starfleet Intel Agent, who went by the name of Thomas Prendar. After gaining interest in the advantages that their "friendship" would offer, Prendar went through extra steps to ensure that Akoni was his pair of extra eyes on the Constitution. This involvement caused a significant increase in anxiety for Akoni, which she secretly keeps to herself. On top of the situation, Commander Kalos Fiorr, a sort of mentor to Akoni, switched to a different department, creating a deeper sense of isolation for the new ensign.

Akoni decided after their mission with the Unity that perhaps some change would benefit her, hence her re-appearance as an Intelligence officer, though some have thought this change might have less to do with a need for change, and more a cover-up for her involvement with the government of Starfleet...