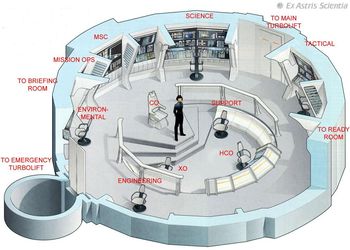 In a time when ships can go faster and farther than ever before, it can be easy for a ship to be left alone. And in those times of solitude, that ship and her crew must be ever able face any unexpected threats that may arise. Thus, the bridge, the nerve center of the vessel, must be well-equipped and efficient. The "Prometheus model two" bridge surpasses these requirements.

The bridge is of a circular shape, and the layout is similar to most other Federation vessels. As usual, the captain sits towards the middle of the room, and the chair sits on a raised platform, along with all of the stations that encompass the perimeter. The captain's chair is equipped with a console on either side, similar to that of Galaxy class vessels. In front of the captain, three steps lead down to a lower area. At the front of this area is a curved Flight Control (Conn) station. This is where the main Helm, Communications, and Operations controls are located. The chair is designed to swivel across the length of the console, giving its operator quick access to all controls. A backup helm computer sits below the helm station, allowing control even in crisis situations. Immediately down the stairs and to the right of the captain, the First officer sits. A status console is at their right. On the opposite side, a support officer, often the ship's counselor, or a high-ranking visitor, sits, with a status console on their left.

State of the art equipment, matched with highly trained crew, can make the Prometheus class vessels nearly unstoppable. In an emergency, all systems could be routed to the bridge, making it impossible to access them from any other location. These attributes make the Prometheus class an effective long range attack and exploration vessel. Whilst the Federation is still in the shadows of war, the fleet must be prepared to defend freedom at any time. The Prometheus class gives Starfleet "the power to mete justice."