The USS Kodiak-B is a Norway class vessel and the third starship to bear the name.

The first Kodiak was a Galaxy-class vessel. During a border dispute with the Tholians, the ship received damage beyond repair, and Captain Rendary was lost. Captain Lang Vedoc, on stardate 237608.01, assumed command of an experimental Dauntless-class vessel christened USS Kodiak-A. Vedoc served as Commander of the vessel until stardate 237704.01 when he was reassigned to carry out a special assignment for Rear Admiral Marlin. Captain Hollis was then assigned as captain of the vessel. 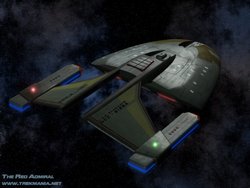 On stardate 237911.14, Admiral Hollis lead team of ships against a race of dimensional invaders, the T'lithians in the Dauntless class Kodiak-A. The enemies were forced back, but the Kodiak-A had to undergo saucer separation, and the Star Drive section was abandoned. On 237912.20 the Kodiak-A was decommissioned, with a new Kodiak replacing her almost at once. A Norway-class, modified for diplomatic and scientific missions, this Kodiak is smaller and more agile than the previous namesakes. Reduced weaponry allow the Kodiak to support multiple science labs, conference rooms, diplomatic grade quarters, and experimental multi-phasic shielding. Although it's primary mission is peace, like the Kodiak Bear itself, the ship carries the necessary weaponry to defend itself.