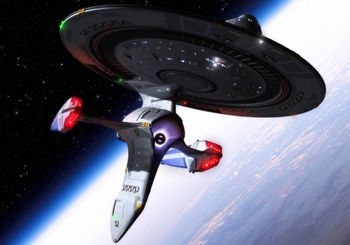 The USS Za, NCC-65305, is an experienced deep-space explorer of the Chariot class under the command of Captain Keelah Rhani that, since its commissioning in 2370, has explored the furthest reaches of the galaxy to the south of the Federation. The Za is a long-range, self-supporting ship that engages in multi-year missions. Its most recent launch was in 2393, from Starbase 118, during which time it was equipped with some technological refits and welcomed a new commanding officer, Fleet Captain Zalea Solzano. Solzano served as the Za's captain before command was transferred to Captain Rhani later that year.

The Chariot class of deep-space explorers was a direct follow-up to the Ambassador class program, and a parallel development to the Galaxy class. With design cues drawn from Federation starbases, Chariot class vessels are like mobile starbases: nowhere near as large, but with the ability to sustain very extended missions without support or resupply. Chariot class vessels are defensive powerhouses, with shields and armor that inspired the defensive systems of heavy escorts like the Defiant class. However, those defenses are offset by a sharp drop in offenses, and even with upgrades, the offensive systems of the Za are about equivalent to a Galaxy class vessel at the beginning of that class’s service run. Similarly, Chariots are slow and bulky compared to other vessels, with a preferred cruising speed of around warp 5. However, one of the upgrades the Za received during its most recent refit was a quantum slipstream drive--though what quirks may manifest by upgrading this old ship with such a drive remain to be seen.

The Za is a second generation Chariot class vessel. As newer explorer and cruiser designs were introduced into the fleet over the years since the class’s first launch in 2340, a major refit was scheduled in 2375 to ensure the class’s lifespan well into the 25th century. Incorporating design cues from Starfleet’s newest explorer, the Sovereign class, the second generation Chariot class received upgrades to its warp propulsion, tactical, computer, and sensor systems. The upper decks of the saucer were completely revamped to incorporate a new bridge module now located at the ship’s bow, and the entire complement of autonomous survival and recovery vehicles (ASRV) were swapped with the newer, triangular shaped model designed for the Sovereign that incorporated a heat shield into the vehicle’s cover.

The missions of the Za have consistently taken her to the galactic south of the Federation, outward and spinward from the galactic core. Since her commissioning in 2370, she has served several three- and five-year missions of exploration, and she launches from Starbase 118 to continue that long-range objective. Her mission is to explore beyond the edges of the frontier.