Serren Tan, fourth of the Tans, is currently serving as a junior Tactical and Security Officer aboard Starbase 515.

For his Skarbek version, see this page. 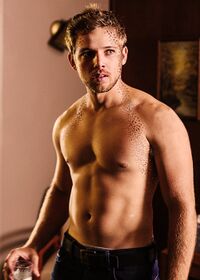 Home of the Fire Gods

Serren hails from a remote, frozen area of Trill known as Vilari, or in the local dialect, "Home of the Fire Gods".

Vilari is a frozen pseudo-Antarctican environment where much of the landmass is encrusted with kilometers-thick sheets of ice and what little land is available is little more than volcanoes jutting out of the frozen wastes. Without modern technology life would be impossible there; temperatures hover at -20c and can regularly drop below -50c, sometimes for months on end, with winds exceeding 100 knots during storms, which can last for weeks. There is almost no rainfall or snowfall. It is a land of howling winds, biting cold, and dry, inhospitable air.

During summer the continent is exposed to almost sixteen hours of daylight a day, while during winter, the reverse is true. Volcanos sometimes erupt, blanketing the area in ash so thick it blocks out the sun and spewing out lava flows that carve great swathes through the ice. There are no indigenous Trill in the area, no naturally occurring plants save the occasional hardy moss, and few animals.

To sustain life, a community of approximately eight thousand Trill resides in a sealed facility called "The Ring"; an insulated, thick-walled structure built into the side of a (mostly) dormant volcano, encircling it in its entirety and extending out for a kilometer in all directions. Energy and warmth are harvested from the rich magma veins that run below the "town", with the people there living a modest, simple, rural life below the thick, insulated roof of their facility.

Secretive even by Trill standards, Ring culture is sometimes referred to as a "cult", with uncharitable parallels made to Earth luddites or neo-primitive philosophy. Sometimes wild claims are made about the local religion, including human sacrifices (with the poor unlucky "chosen ones" being hurled into the volcano), conspiracies about being "anti-joining", or even stranger claims. The truth is much more mundane: the inhabitants of The Ring simply want to be left alone to lead a simple life, and their religion is (these days) little more than folk traditions that grew out of worshipping "fire gods". They are secular and peaceful, and while they prefer to eat food they've grown themselves rather than replicating it, and while they often possess sometimes strange skills such as brewing or ice carving, Ringers use communicators and holograms and replicators and computers and drilling phasers just like everyone else.

Agriculture plays a crucial part in Ring life. Plants fill every corridor and almost every available space in most rooms and sections, heavily favouring plants that can be eaten or produce seeds, berries, or roots that can be eaten, with the green playing both an important role in providing food, morale, and also clean, warm, fresh air. Experts at growing plants in areas of dim light and poor soil, an average Ringer can coax green into almost any space, no matter how inhospitable. Accordingly, Ringers tend to hold botany in high regard and consider cooking food made from one's own plants to be a noble, "down to earth" endeavor.

Due to their isolation, Ringers have developed a unique accent that is archaic and, as some describe it, "terribly provincial". Although religious discrimination and similar problems have long since been eliminated on Trill, Ringers sometimes find that their accent, unique colloquialisms, and colourful curses mark them as outsiders, a status they are often content to accept.

As with many Trill, the prospect of joining is seen as highly desirable. Despite this, joining is a rare act for a resident Ringer, although not due to their faith or traditions. As with much of the mysterious Ring, the truth about this quirk of their society is mundane; joined Trill tend to be emboldened by the process, develop wanderlust and a desire to explore and see the rest of the world (or even the galaxy, doing things like joining Starfleet or enlisting in civilian service), and so while not prohibited nor even discouraged, only a small number of joined Trill live in the Ring at any one time.

Accordingly, although Ringers prefer to educate their children themselves, some parents send their children to exclusive joining academies with the hopes of becoming one of the select few who are joined. Occasional rumours suggest that Ringers are given preferential treatment in these joining academies due to former Ringers in strategic positions on selection committees, or perhaps due to pity for their remote existence, however the few joined Ringers that exist often insist that they earned their symbionts, just like everyone else.

hosts which he concedes can cause problems, as many folk claim to value honesty, but sometimes become offended at the truth.

Serren is confident and occasionally flirtatious, with a tendency to assume the same in others. He makes friends quickly and has found that with the implantation of the Tan symbiont came a lot of baggage, including a strong emotional connection to the USS Gorkon and her crew.