From 118Wiki
< Serren Tan
Jump to navigation Jump to search

"We gotta be careful, you know. Half the people in this place are crazy." - Serren "TNT" Tan, confiding in his hidden "sentient" prison shiv.

Serren "TNT" Tan, fourth of the Tans, is currently a pilot and fighter aboard the Skarbek.

For his Prime version, see this page.

Can you keep a secret?

Serren has two prosthetic arms, Federation issue. As strong as biological arms, but tougher, the top part is bulky and shiny-chromed, while the remainder is fleshy and similar to their biological replacements. The right arm has a hollowed-out void just big enough to hold a shiv, which is currently the home of Buddy 3.

"Buddy 3" (don't ask what happened to the other buddies, it's rude) is a crudely constructed prison shiv that Serren manufactured in the first days of their imprisonment. Consisting of the extracted part of some kind of broken tool, TNT believes that the shiv can speak to him telepathically, is a "he" with a distinct personality and wants and dreams and goals and ambitions, and is the only thing keeping him sane. A helpful guide taking him through the traumas of his life. 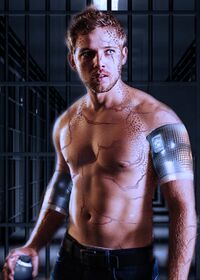