Dr. Canice William Styles McMullen, M.D., FFCS, is currently serving as a Surgeon and Medical Officer aboard the USS Resolution. He is a board certified member of the College of Surgeons, belonging to the Fellow, Federation College of Surgeons FFCS. Canice has a twin brother Fr. Philip Neri Styles, born Jacob Michael Styles McMullen, who is a Catholic Priest serving in the Archdiocese of Star Fleet.

He has a dream of one day being the Commanding Officer and Chief Surgeon of a Major Star Fleet Medical Outpost, where groundbreaking work is being done.

Growing up in a very large family of overachievers and deeply religious people, Canice harbors the deeply held belief that he does not match up. He has spent much of his life attempting to please his Father and older brothers and desperately wanting them to respect him and treat him as a peer. He even followed in their footsteps and planned to become a dentist surgeon before changing his specialty to neurosurgery medicine in his second year at Exeter.

It wasn’t until medical school that he was able identify his own strengths and has slowly grown in confidence. He is very hard-working; eager to please and easily hurt when he feels embarrassed. In social situations, he tends to hold back and doesn’t like to be the center of attention, preferring interactions with smaller groups. During his time on board the Deep Space 224 Canice developed confidence in his ability as a doctor and was eventually able to assert himself. A naturally caring person, he grew very close to his small medical staff in his department.

When it comes to the non-medical aspects of Starfleet life, he can feel out of his depth and prefers the safety of of his Medical Lab or in Sickbay to the uncertainty of away missions.

Canice was born in Cork Ireland, on Earth, his parents were both very active, his mother was school teacher and his father was dentist. He grew up with four sisters and four brother, a total of nine kids in the house. Privacy was always an issue, so he spent a lot of time playing in the woods and building forts, later he would use these forts as a place to read.

Canice did his Residency and his Fellowship at Deep Space 224, he specializes in neurological disorders with a sub specialty in infectious diseases, focusing in on effects of Borg assimilation. He was educated at the University of Exeter School of Medicine and later at Star Fleet Medical. 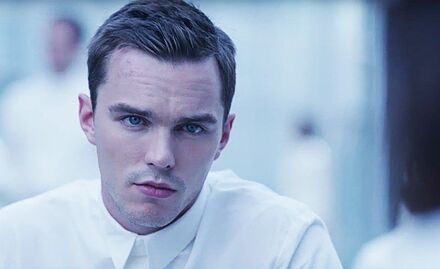 He spent much of his time on Deep Space 224 working in the Borg nanoprobe lab, his work was two fold, introduce new medical procedures using nanoprobe technology, and work to full free a someone that has been fully assimilated by the Borg, by removing all borg implants without the body shutting down.

This work was very intense, and Canice got to put some of test into practice when the Station first office was nearly blown apart and traditional medical practices were not working on healing the brain. He was able to use probes, the navigate the brain safely, and deliver the nanoprobes, the surgery was 14 hours long, and the recover of the Commander was a few days, but it saved his life.

He was able to use that surgery as a test-bed case and to perfect it further on the Holodeck, he sent all his logs, test cases, and holo uploads to Star Fleet Medical for there review of it. He spent more and time on his research, but started getting tired of being in just one place on a remote station, when the USS Resolution was sent into the The Borderlands Canice jump at the opportunity to transfer to her. He spends most of his time in a Bio-Medical Lab working, but will help out if needed on away missions or in Sick Bay as needed. 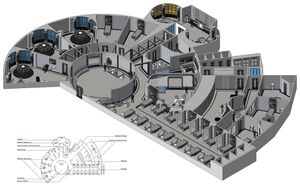 Canice spent most of his time in Sickbay and mostly his lab in Sickbay, he had to do regular rotations in the primary sickbay as a Medical Officer, for the most part he did not mind the rotations in Sickbay, especially if it was in one the Surgery wards, however he did not care to work on the crew in the primary sickbay, treating things like runny noses and such, things like that took him away from his research.

Moving from Deep Space 224 to the USS Resolution the sickbay and labs were much smaller and not as well equipped with the latest and most up to date technology and tools. But being able to be out on the front lines, was just to much to not take up the opportunity to serve on the small ship. Also being on a small ship, Canice felt it would push his skills, and he would also be more comfortable with a smaller crew. 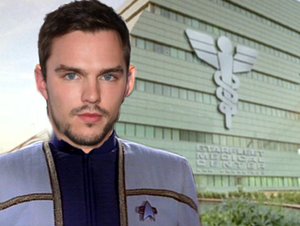 Canice was accepted to Starfleet Academy on his first attempt and began study with a major in Nanotechnology and a minor in MicroBiology. He greatly enjoyed his time as an undergraduate, making a close group of friends and finally feeling free of the expectations of his family. A good, rather than exceptional student, he graduated in the top ten percent of his class and was accepted to the Starfleet Medical post-graduate program.

Starfleet Medical: The transition from undergraduate to postgraduate study was not an easy one for Canice and in the first year he struggled to maintain his grades. As all of his friends had accepted commissions and were on their first postings, the support network he had built up over the previous four years was gone.

Although not on his official record, for a time he was using stimulants in order to stay focused and study. He became depressed and was close to washing out of the program. His dramatic change in attitude was spotted by one of his professors who, in an attempt to help him decide whether he wanted to be a doctor or not, arranged for him to volunteer in the field during a planet wide outbreak on the Bajoran colony Telian IV.

He spent three months working with Starfleet Medical colleagues and Bajoran doctors during the outbreak. This was a truly life changing experience for the young medical student. He discovered that he truly loved medicine but was more suited to surgery than trauma medicine. With a new sense of purpose, he completed medical school.