The USS Ursa Major, NCC-830214, is the eighth Sovereign Class vessel built. Laid down at Utopia Plantia, the Ursa Major follows the over all characteristics of its sister ships. Heavily armed and armored, it has 12 type XII phaser arrays as well as four rapid-fire photon/quantum torpedo launchers. The FSS 3 shield system is the most advanced in Star Fleet designed to protect against Borg and Dominion weapons. The shield is backed up by several centimeters of ablative armor. Improvements in warp engines allow the Ursa Major to travel at warp 9.7 for up to two days, and warp 9.9 is theoretically possible. 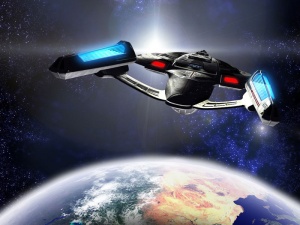 Unlike its predecessor the USS Titan, Ursa Major does not carry marines or a fighter squadron. Nor does it carry the extra weaponry of the picket duty Sovereigns. Instead, Ursa Major is equipped with expanded science, diplomatic, and medical facilities emphasizing the traditional exploratory role of Starfleet. During sustained conflicts, Ursa Major would undergo a four-to-six month refit to add those extra weapon packages.

Built for deep space, Ursa Major's mission is to extend the Federation's knowledge of the greater galaxy through scientific research and diplomacy. Yet, the "Great Bear" has the teeth and claws necessary to face the threats of the 24th century.